In the aftermath of the Civil War, the Southeast needed a healer — someone to give back at least a little of what slavery had taken from the land and the people. Black scientist George Washington Carver stepped into that role and, in the process, revolutionized farming as we know it.

Most Americans remember him simply as the “Peanut Man,” summarizing his life’s work with what was, arguably, his least important accomplishment. Oh, sure, Carver did discover around 300 uses for peanuts, from soap to wood stains to cooking oil — but those things were almost beside the point. He didn’t set out to create new kinds of milk and paper, and, to be fair, many of his inventions never took off. (Despite misconceptions, peanut butter is not in his portfolio.) The legume played a supporting role in his bigger mission: helping Black farmers throughout the South grow enough food to sustain their families and free themselves from the oppression of sharecropping.

That noble cause led Carver to develop farming methods that increased crop yields, safeguarded ecological health, and revitalized soil ravaged by the overproduction of cotton, the linchpin of the South’s economy. No less importantly, Carver devoted much of his life to teaching formerly enslaved people how to use those techniques to achieve a measure of independence.

“Carver was one of the founders of the modern organic movement, which has changed the face of agriculture and will continue to in the future if we want to have a hospitable planet,” says Leah Penniman, a 2019 Grist 50 Fixer, co-executive director of Soul Fire Farm in Petersburg, New York, and a student of Carver’s work. “Flattening him to just a pinup with a peanut in an elementary school corridor does not do him justice.”

Monuments and colleges bear Carver’s name, yet few textbooks offer a full picture of his remarkable accomplishments, let alone address the political motivations behind his work. But recognizing them underscores the fact that the fight for environmental justice is not new, and we can learn crucial lessons from its past leaders.

George Washington Carver was born into slavery during the Civil War, although the exact year remains something of a mystery. His father was killed before his birth, and Confederate slave raiders kidnapped his mother, whom he never saw again, when he was an infant. Carver grew up in a variety of homes before leaving Missouri at 11 to attend school in Kansas. The one constant in his life was an abiding love of botany. Carver learned about gardening and herbal medicine from each of the women who cared for him, and he often spent his days collecting herbs and flowers and experimenting with natural pesticides and fertilizers. He was soon renowned for curing sick crops and houseplants, leading people to call him the “plant doctor.”

His talents led him to Iowa State Agricultural School, where he earned a master’s in agriculture in 1896. His research on fungal infections in soybeans impressed Booker T. Washington, who founded what is now known as Tuskegee University in Alabama. Washington invited Carver to help start its agricultural school, where he became a beloved professor. Still, Carver’s passion lay beyond the classroom: He wanted to liberate Black farmers from a system designed to keep them dependent upon white landowners.

After emancipation, the federal government promised Black families “40 acres and a mule.” But President Andrew Johnson reneged and returned the land to white plantation owners. That essentially forced Black farmers to lease land in exchange for a portion of their harvest, giving rise to a new system of oppression: sharecropping.

Indentured farmers struggled to grow enough food to survive, let alone enrich their landlords. The overproduction of a cotton monoculture had drained the soil of its nutrients. “When my train left the golden wheat fields and the tall green corn of Iowa for the acres of cotton, nothing but cotton, my heart sank a little,” Carver recalled in a 1941 radio broadcast. “Fields and hillsides cracked and scarred with gullies and deep rut. Everything looked hungry: the land, the cotton, the cattle, and the people.”

Carver took to his lab, seeking a prescription for Alabama’s ailing soil. He discovered that rotating nitrogen-rich cover crops of peanuts, cowpeas, and sweet potatoes would reinvigorate the land, increasing yields and diversifying farmers’ food supply. Carver also promoted free, all-natural fertilizers like swamp muck and compost that were kinder to the earth. Such things are good for the planet, of course, but also good for those working the land; helping Black farmers grow more food while spending less money got them closer to food sovereignty, something Carver understood was essential to their liberation.

“Whoever controls the food controls the people,” says Penniman, who has taken Carver’s lessons to heart. Soul Fire Farms distributes fresh produce to Black and brown communities while teaching people how to grow their own food and fight for a more equitable agricultural system — just as Carver did more than a century ago. “For us to have self-determination means that we need to have control over our food supply. The yearning to independently produce one’s own sustenance is core to what it means to be human.”

As more farmers grew peanuts to improve their soil, they found themselves with a surplus. Carver gave this problem a lot of thought, waking before dawn to walk through the woods near campus seeking guidance from God. He discovered that the legume is remarkably useful, and developed a long list of applications in an effort to create a viable market for this new crop.

Although Carver wasn’t vocal in his views, his actions revealed his revolutionary thinking. He never tired of teaching farmers how to nourish the earth — and themselves. He hosted free seminars at the university and wrote bulletins filled with farming advice and recipes. He designed a mobile classroom, called the Jesup Agricultural Wagon, and visited far-flung counties to offer hands-on demonstrations. (The outreach was so popular the United States Department of Agriculture follows a similar model even now.) “He and his team found the farms in need of help,” Penniman says. “They fixed fences, planted cover crops, took care of animals. This idea of meeting people where they’re at remains an important lesson in organizing.”

Carver’s emphasis on food justice and sovereignty is no less urgent today. White people own 98 percent of rural land in America, while Black families are twice as likely as white ones to experience hunger.

In a flower, infinity

Carver wasn’t focused only on nourishing people — he wanted to nourish the Earth. He understood that agriculture and ecology are inseparable, and that land needs crop diversity to thrive. He advocated woodland preservation as a way of improving topsoil. His recommendation that farmers feed their hogs acorns created a business case for forest management. And the natural pesticides he recommended weren’t just cheaper — they were greener. “This was two whole generations before the opening of the Rodale Institute, which is widely lauded as one of the founders of the organic movement,” Penniman says. “His work was groundbreaking.” 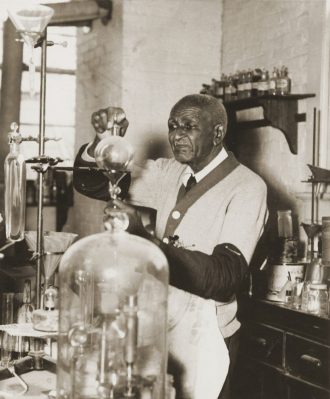 Carver in his laboratory circa 1923. Corbis Historical / Getty

Carver saw nature as valuable in and of itself, an unusual perspective at the time. Although he stood at the vanguard of the early conservation movement, he rarely gets credit for contributing to its bedrock philosophies alongside thinkers like Henry David Thoreau and John Muir.

Like those men, Carver’s connection to nature went beyond the scientific to the spiritual. “I am not merely touching that flower,” he once said. “I am touching infinity. That little flower existed long before there were human beings on this earth. It will continue to exist for thousands, yes, millions of years to come.” As a child, Carver displayed a knack for communicating with the natural world, something he carried with him throughout his life. “He was able to tune into something beyond the cacophony of human influence around him, and really check in about what the Earth wanted,” Penniman says.

Today, the holistic, restorative farming approach he favored often is seen as an “emerging” environmental antidote. Permaculture, as some now call it, extracts carbon from the atmosphere, increases yields, and improves crop hardiness in a warming world. President Biden promises that sustainable agriculture will play a role in his climate policy. The success of Netflix’s star-studded documentary Kiss the Ground reveals a growing appetite for this once-wonky idea.

But many people whitewash the history of the practice. Indigenous communities have been practicing sustainable farming for millennia. Carver reintroduced it to the South because he understood that when land suffers, those who tend it do, too. Emphasizing that link is a key strategy for contemporary organizations like the Sunrise Movement, and you can draw a line between Carver’s beliefs, the Green New Deal, and the recognition that social and economic concerns are inextricable from ecological ones. They’re all part of what Carver saw as an infinite, interconnected web.

Carver became famous — in Black and white communities alike — for his work. The NAACP awarded him its Spingarn Medal in 1923. Time named him a “Black Leonardo” in 1941. And in 1945, President Franklin D. Roosevelt approved the creation of the George Washington Carver National Monument, the first dedicated to an African American and the first to honor someone other than a president.

So why, then, is Carver’s complex legacy reduced to peanuts?

Devyn Springer, a Black artist and writer in Atlanta, suggests that it’s because Carver’s work so vehemently challenges the capitalist status quo. Land, in Carver’s view, was not a commodity. It is something to be protected — treat it well, and it sustains us. But of course, that curbs profit and growth. And teaching Black farmers how to tap the land’s abundance, as Carver did, upsets the racial and economic hierarchy on which America was built. Recognizing that as we tell the whole story of Carver’s life is essential to celebrating his past — and safeguarding our future.

“There is a mythology that Black and brown folks have not been involved with the environmental movement, or have not taken leadership in it,” Penniman says. “We need to reclaim our history and say to young people, ‘When you take a stand for the Earth and for the human community, you’re not making that up or doing a white-people thing. You’re honoring the legacy of your ancestors.’”

Tuskegee’s most famous soil scientist saw miracles in the peanut, heard God in the forest, and sowed liberation in the soil. In doing so, he took some of the first steps in the long march toward racial and environmental justice that continues today.