In his encyclopedic cinderblock of a book Musurgia Universalis of 1650, the German polymath Athanasius Kircher imagined God as an organist pulling out a new stop on each new day of Creation and playing the world’s beings into life. Kircher didn’t mention any Pandemic Pipes in his World Organ, but they have been sounding for the last year: thunderous blasts and frenetic figurations; quaking chords and sustained tones of numbing boredom; ponderous silences.

If not for the drawing of the Covid top, Cornell would now have been marking the tenth anniversary of the dedication of its creative reconstruction of one of the vanished musical monuments of the baroque: the magnificent organ in the chapel of the Charlottenburg Castle in Berlin. That instrument was destroyed in an Allied bombing raid in 1944, but after a ten-year research project involving Cornell and Gothenburg University in Sweden, this vanished work of art found an unlikely earthly afterlife in Ithaca, New York. Ten years ago this week builders, scholars, and performers from around the world, many of whom had contributed to the project, came together at Cornell for four days of celebratory concerts, lectures, and banquets. 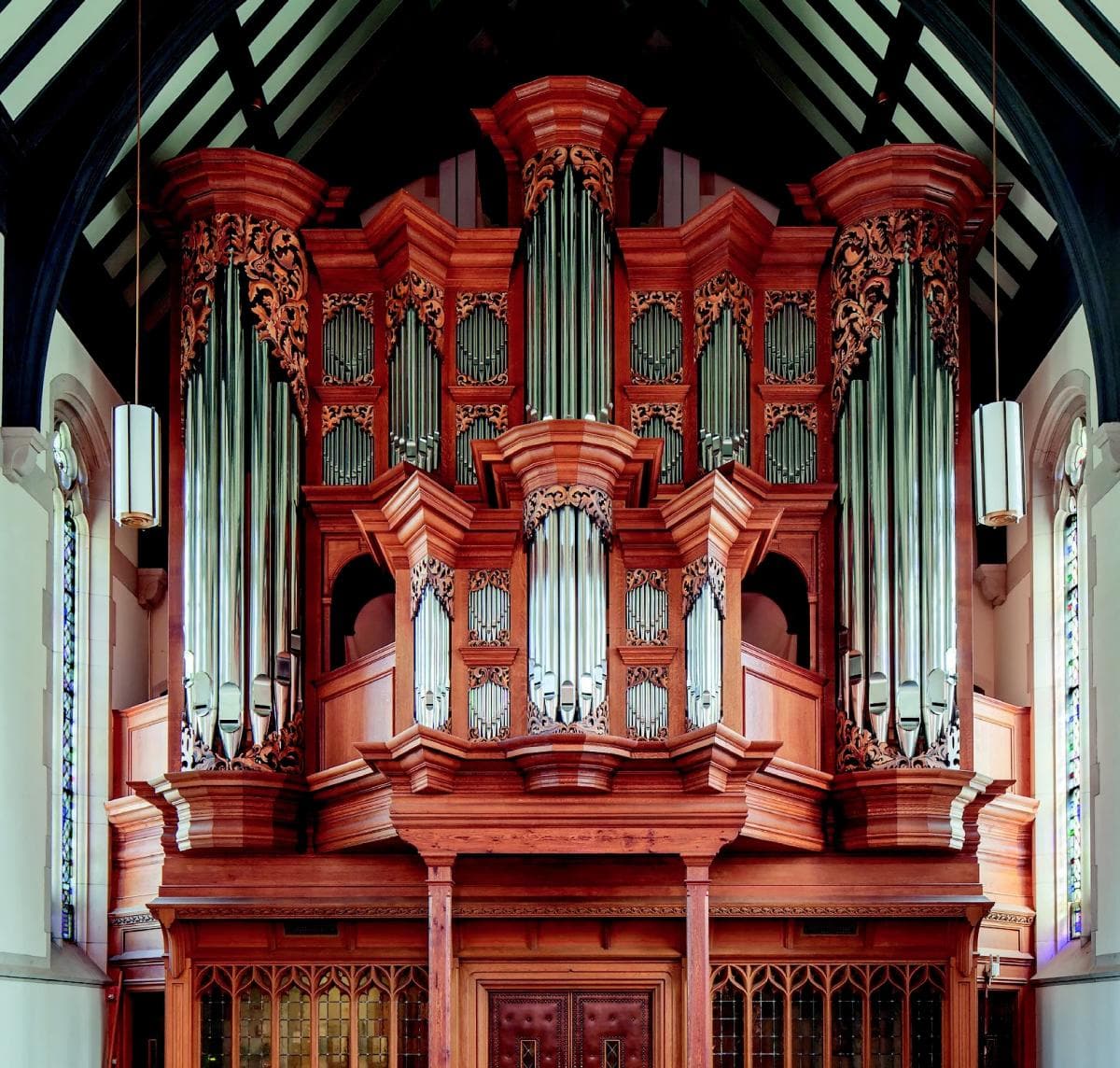 Kircher could think of God as an organist because the instrument He played was the most complex technology ever seen or heard. Delving into the mysteries of life and artifice, Kircher held a particular fascination for automata, including organs played as if miraculously by themselves, the keys depressed not by human fingers but pinned barrels, the wind raised not by human feet but water power. Kircher was several centuries ahead of his time on the sustainability front. 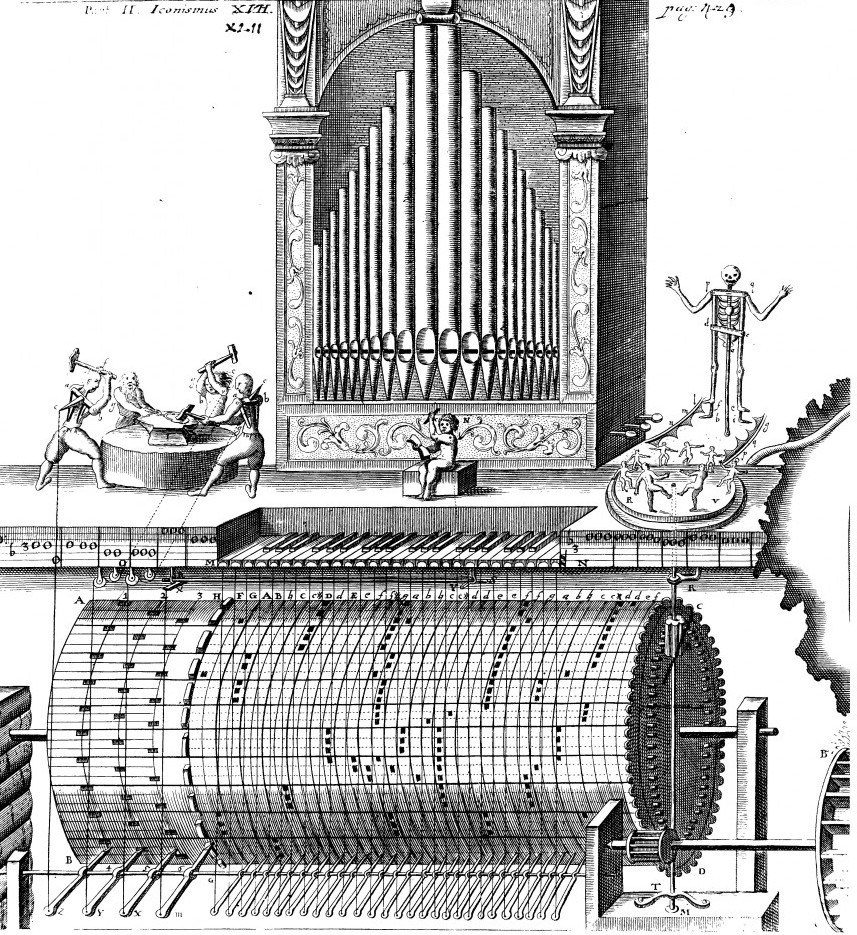 Automatic organists do not need to be vaccinated. In a pandemic such as this one, the human musician must steal into the empty church alone. Luckily, no instrument is better suited to social distancing than the organ. With no ten-year anniversary festival in the offing, he presents a short program of music originally composed for mechanical organ (program notes below): a séance, as it were, with the ghost in the machine.

A decade since its unveiling, Cornell’s baroque organ sounds ever better, even after a decade of harsh, wood-crackingly arid Upstate winters. But how about the organist? That much closer to being replaced by a post-Kircherian android (assuming he hasn’t been already)? Have a look and listen to judge for yourself— with or without the aid of artificial intelligence …

Although Mozart’s regard for Johann Andreas Stein’s pianos is well known, one might well think that the great keyboardist was even more interested in the instrument maker’s organs. In a letter of 1777 Mozart proclaimed his devotion: “When I told Herr Stein that I should very much like to play on his organ, as that instrument was my passion, he was greatly surprised and said: ‘What? A man like you, so fine a clavier-player, wants to play on an instrument which has no sweetness, no expression, no piano, no forte, but is always the same?’ ‘That does not matter,’ I replied. ‘In my eyes and ears the organ is the queen of instruments.’ He thought that I would not do much on his organ; that I would play, for instance, in a thoroughly pianistic style. […] We reached the loft and when I began to improvise, he started to laugh; then I played a fugue. ‘I can well believe,’ he said, ‘that you like to play the organ, when you play so well.’” This was no hollow compliment: Stein had not only made the splendid organ in the Barfüsskirche in his home city of Augsburg, he was also the organist there.

The Queen of Instruments (the gender of “organ” in German—Orgel—is feminine) figures prominently in the exploits of the prodigy Mozart from the age of six when he astounded the Franciscan monks of Ybbs with his uncanny prowess. At the parish church in Wasserburg, near Munich, a year later the boy somehow used his feet at the pedals; he was so small that he had had to stand on the pedalboard. On his 1764 trip to Paris Mozart enthralled listeners at the Royal Chapel in Versailles where so many of the renowned French organists had held forth.

In 1765 and early 1766 Mozart played the towering instruments in the cathedrals of Ghent and Antwerp, and then in Haarlem’s St. Bavo in The Netherlands, one of the largest and most famous organs in Europe. Handel had displayed his skill with hands and feet there in 1740 when that organ had just been completed, as Mozart would have learned on his visit. History was listening, too, when he sat down at these musical monuments.

During Mozart’s Italian journeys of the early 1770s he was heard on organs by crowds of admirers. Later that decade he visited the great instruments of Strasbourg built by Johann Andreas Silbermann, who had taught Johann Andreas Stein the art of organ (and piano) building. Mozart also played in Dresden and in Leipzig on organs performed on by J. S. Bach himself.

Though Beethoven was trained as an organist he, like Mozart, did not leave much of a record of these activities. One has to look elsewhere, to the mechanical instruments in clocks for which Haydn, Mozart and Beethoven all wrote. Haydn’s compositions and arrangements for these mechanical instruments are small-scale pleasantries–miniature marches, arias, and overtures similar in scope and lightness to the Presto in G major, which takes its lively theme from one of Haydn’s most celebrated string quartets, “The Lark.” This perpetual motion thrill-ride is a fun challenge, for it is not easy to match the unerring precision of the machine with fallible human hands.

Beethoven’s Adagio in F major is more expansive than Haydn’s bird-like bagatelle, yet it never strays from the pleasing style. The piece was commissioned by Joseph Müller, the self-styled Count von Deym, who ran a Cabinet of Curiosities in Vienna. One of the rooms housed a mausoleum of wax-figures and Deym-Müller hoped to enhance its ambiance with music from a mechanical organ—a Flötenuhr.

It was for this same wax museum that Mozart composed his Fantasia in F minor in the last year of his life. The piece was admired and copied out by Beethoven, who surreptitiously, and perhaps somewhat sardonically, quotes from one of the counter-subjects of the second fugue of Mozart’s Fantasia in his own effort for Deym. Encompassing the genres of the overture, the fugue (including the contrapuntal techniques of inversion, diminution, and close strettos), and the variation, Mozart’s Fantasia is a genre-busting response to the limited capabilities of the Flötenuhr. Like most mechanical organs, the Count’s instrument had a compass of only three octaves, yet it was rich in tonal resources, including powerful reed stops. Mozart apparently accepted commissions to write for the Flötenuhr only out of financial necessity, but instead of dashing off a simple piece of vacuous prettiness, he produced a work whose grand dimensions and lofty ambitions dwarf the medium for which it was originally intended.

I imagine that Mozart, the avid organist, would have seized the opportunity to play this piece—one of his most sublime fantasias and most riveting of fugues in any repertory for human or machine—on a large church organ. In such a scenario, Mozart would not have felt himself constrained by the three-octave range of the Flötenuhr; rather he would have made use of the full compass, the pedal, and all the tonal resources of an instrument like Stein’s in Augsburg or the sublime behemoth of St. Bavo’s in Haarlem. In playing this piece from the open score I do all these things, deploying the pedal selectively throughout, but at last letting the feet take over the wild counter-subject of the final fugue as the Fantasia races towards its breathless finish. This counter-subject turns out to be conveniently playable by, though also taxing for, feet. It is almost as if, when he set pen to paper to satisfy von Deym’s less-than-exalted request, Mozart was recalling those years of European travel during which the monumental organs of the continent were among his favorite destinations, technological wonders of musical science that he would never play again.