Louisiana has never been hard to pinpoint on a map — it’s the only state in the U.S. that looks like a giant boot. At least it did, before the ocean swallowed the carbon emissions belched out by industrializing nations and began to swell. Now, the boot is losing a football field of land every hour to the rising tide.

In order to save the state from sea-level rise, the Louisiana state government is embarking on a series of years-long, multi-billion dollar projects to slow the rate of land loss. This month, the U.S. Army Corps of Engineers, the federal civil works and military engineering agency, greenlighted the first of those large projects. The money to fund it is coming from an unlikely place: BP, the multinational oil corporation.

Slowing the rate of land loss in a state like Louisiana is easier said than done. As the ocean has risen, it has seeped into the delicate bayous that comprise the sole of the boot, flushing them with saltwater and killing the deep-rooted plants that keep the watery marshes from disintegrating. This slow seepage has cascading effects. It makes folks living along the coast more vulnerable to tropical storms, hurricanes, and storm surge. It threatens to wipe away huge swaths of Louisiana’s tourism industry and indigenous species of flora and fauna. And it will eventually force millions of Louisiana residents to flee their homes. The state could lose a third of its coast by 2050.

Their first foray into this land-making enterprise will take place in the Barataria Basin, a wetland south of the city of New Orleans. Using remediation funds from the Deepwater Horizon oil spill, which covered the coast in a thick layer of oil in 2010 and is still impacting wildlife and industry in the region, the state will channel the river and the crucial sediment and nutrients it carries into the basin. Doing so will prevent the basin — which serves as a buffer for the rest of the state, and particularly New Orleans, against flooding from hurricanes and sea-level rise — from losing 550 square miles of land over the next 50 years. The project made it through a major hurdle of the approval process on March 5 when the Army Corps released a draft environmental impact statement that assessed the pros and cons of the diversion. If all goes according to plan, construction could begin as soon as spring 2022. The mid-Barataria diversion is shaping up to be one of the largest ecosystem re-engineering projects in U.S. history.
The sediment diversion project would infuse the highlighted portion of the map with fresh sediment. Restore the Mississippi River Delta
Before the late 1800s, the Mississippi River flowed freely without sophisticated earthen and concrete impediments like dams and walls. As it flooded and retracted seasonally, it deposited sediment along its banks. Where it emptied into the ocean, it forged swaths of coastline. The volatile nature of the river made living near it impossible and using the river for navigation and trade difficult. Just before the turn of the 20th century, the Army Corps of Engineers started putting up walls and levees along the river to stop it from flooding. Louisianians drained the river-adjacent marshes and wetlands and built houses on them. Putting the river in a straightjacket made it possible for people to live along its banks, which, thanks to the river’s land-building power, were some of the highest land in a state. But restricting the river also prevented it from building new land, and the state stopped growing.

“We made a decision, and now we’re living with the results,” Steve Cochran, campaign director for the environmental advocacy group Restore the Mississippi Delta and vice president for coastal resilience at the Environmental Defense Fund, told Grist.

The $1.5 billion Mid-Barataria Basin Diversion project will punch a hole through the straightjacket and use a complicated series of gates and locks to divert a portion of the river into the Barataria Basin, allowing the river to deposit sediment into the wetland and rebuild it. The flow through the structure when the diversion is operational will equal the force of the Hudson River — 7,500 cubic feet of water and sediment will flow into the basin every second during peak river flow in the spring, the equivalent of approximately five Olympic-sized swimming pools, every minute. It’s expected to create about 28 square miles of new land in the basin, and help preserve many more square miles from disappearing. 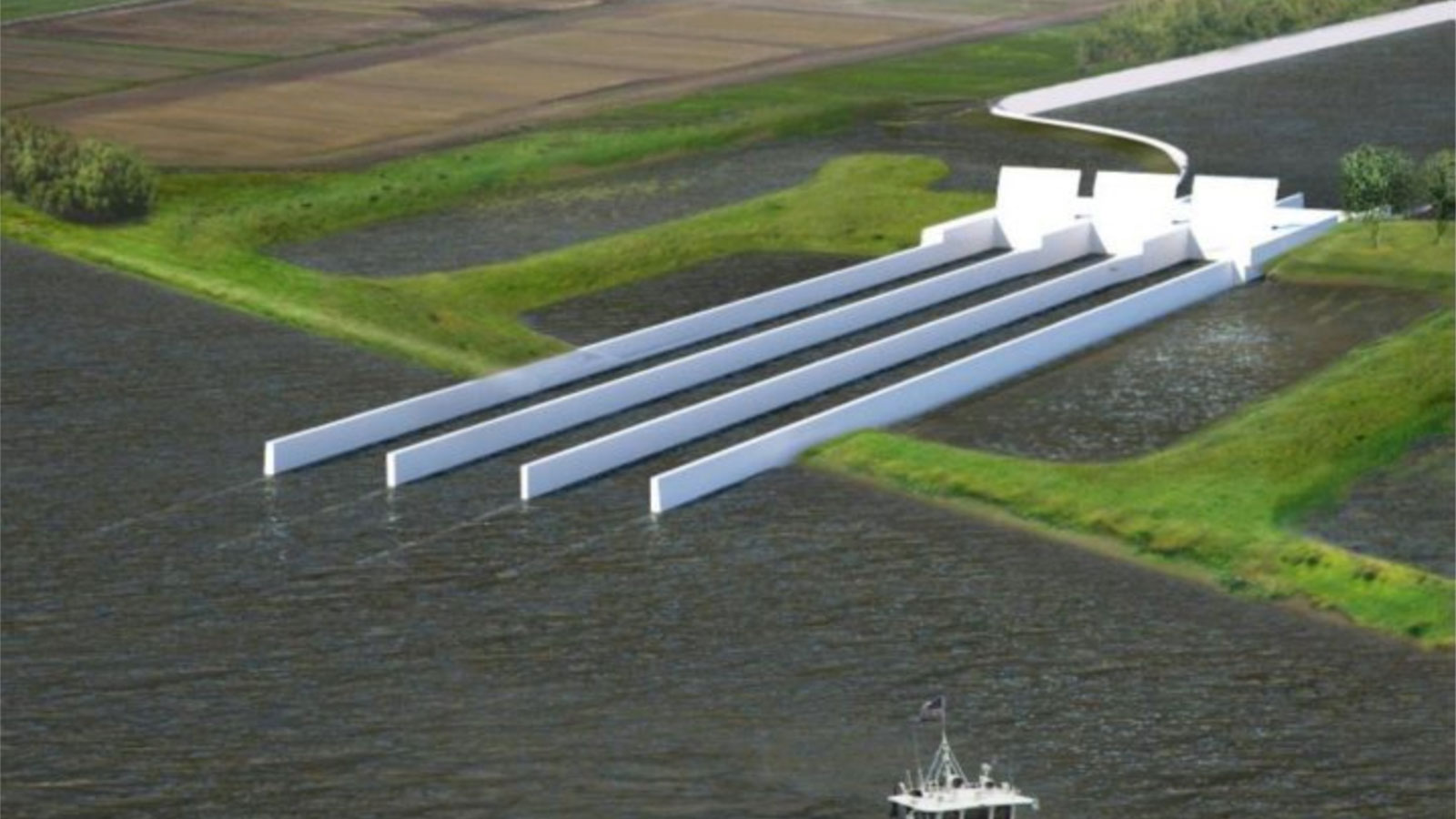 A rendering of what the sediment diversion project could look like. Restore the Mississippi River Delta
“We’re managing change in a climate-driven environment, that’s the norm going forward,” Cochran said. “That’s what everybody in my business is doing, is trying to figure out how to manage ecosystems in a world where change is occurring.”

There are downsides to changing the landscape in Louisiana yet again. Oyster farmers and shrimpers in the Barataria Basin will face an inundation of fresh water, which will kill their shellfish and cover their farms with sediment. Bottlenose dolphins in the Barataria Bay will suffer, too — an estimated 34 percent of them could die when the diversion is up and running sometime in 2022. But the benefits of the project outweigh the negatives.

“There’s no alternative,” Andy Sternad, head of resilience practice at the Louisiana-based architecture firm Waggonner and Ball, told Grist. “If it doesn’t happen, there’s no land building, there’s increasing wetland loss, and New Orleans becomes coastal.” The protective systems built around New Orleans — 350 miles of floodgates and levees — and other densely populated areas of the Mississippi Delta were never intended to be the first line of coastal defense against storms and storm surge, he said. “They depend on the marsh in front of them to function properly.”

The project, which is one plank of a larger effort to protect and restore the Louisiana coast called the Louisiana Coastal Master Plan — a $50 billion plan created in 2007, two years after Hurricane Katrina walloped the state — will serve as a pilot for other parts of Louisiana experiencing severe land loss. Funding for the projects relies in part on the roughly $9 billion in BP settlement money the state will receive through 2032.

Access to that money has made it possible for Louisiana to design climate adaptation projects in the short term. Other states experiencing sea-level rise and other effects of climate change don’t have a pot of remedial money to dip into. But there are efforts underway to change that.
About two dozen counties, cities, and states across the U.S. have filed lawsuits against oil companies that seek to make those companies pay for their outsized contributions to the climate crisis. The lawsuits have been battled back by oil companies thus far, but many of them are still ongoing. If they’re successful, some of the lawsuits would establish stockpiles of money that could be used for projects to protect communities vulnerable to the effects of climate change.

Annapolis, Maryland, became the latest city to sue fossil fuel companies for damages inflicted by climate change in February. City Dock, the historic heart of Annapolis’ downtown area, flooded 65 times in 2019, the lawsuit alleges. The city plans to demolish and rebuild that dock and a nearby parking structure, a renovation specifically aimed at addressing “ongoing and future tidal flooding and storm surge issues,” the city said. The $56 million project is tiny compared to the $1.5 billion sediment diversion in Louisiana, but it’ll be the largest construction project in Annapolis history.

“This lawsuit is all about accountability and determining who should pay the high costs of dealing with climate change,” Annapolis Mayor Gavin Buckley said last month. “Fossil fuel companies knew the danger, concealed their knowledge, and reaped the profits. It is time we held them accountable.” If Annapolis and other plaintiffs have their way, the Mid-Barataria Sediment Diversion project won’t be the last climate adaptation project that Big Oil pays for.