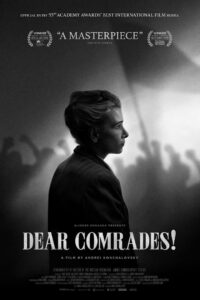 In the early 1960s, the intensifying Cold War confrontation between the U.S. and the USSR was not only a terrifying nuclear-arms race, but also a struggle for prestige and influence vis-a-vis non-aligned Third World nations.  The “Soviet” Union — founded on the promise of a dictatorship of proletarian councils — had long since become a highly centralized and corrupt, Party-run system, in which massive worker uprisings could only prove embarrassing in the “court of world opinion” (and dangerously disillusioning to the well-indoctrinated populace).  Thus, the efficient cover-up of this 1962 massacre of striking workers at the Novocherkassk Electric Locomotive Plant — which is realistically depicted, with some fictional elements, by director Konchalovsky (Siberiade, Runaway Train).

Lest American viewers come away feeling overly complacent about their “democracy,” the rarely acknowledged 1894 massacre of Pullman strikers by 12,000 U.S. Army troops bears some startling resemblance to the events depicted.  Even so, in more recent decades, U.S. administrations have preferred to “export” their initiated and/or heavily backed massacres (Indonesia, East Timor, e.g.; cf. also documentaries The Panama Deception and RAI’s Fallujah, the Hidden Massacre).

The fact that the making of this film was heavily funded by Russia’s Ministry of Culture should also alert us to its possible use as favorable propaganda for President Putin.  Young Russians, many of whom remember little about the Soviet Union, may come away with the impression that living under Putin’s government must be “much better” than under Krushchev’s Communist regime.  (Under Putin, brutal suppression of rebellion has been more likely to occur, from time to time, in remote regions like Chechnya.)  I particularly found the movie’s ending suspect: in the aftermath of the killings, having feared that her daughter was among the dead, stalwart Communist official Lyudmila expresses nostalgia for the days of Stalin (who “reduced food prices”) — and also comes to appreciate her KGB acquaintance as basically a helpful, nice guy.  Former KGB operative Putin, who reportedly plans to oversee Russia for a longer period than Stalin’s reign, would most likely appreciate the character Lyudmila’s outlook.

The script could also have provided more explanation for the causes of the events depicted.  Why the increase in food prices in the first place — which first ignited the workers’ rage?  Bad harvest, hoarding (price-fixing), and/or diversion of budget into “defense”?  Why did plant managers cut wages precisely at this time (talk about bad timing)?  And why didn’t the higher-ups immediately reverse this terribly ill-timed measure — thereby quelling the massive spread of the labor protests?  The film does seem to depict realistically an incompetent, decision-evading process, whereby officials preferred a brutal “quick fix” to patiently resolving the crisis (and possibly being blamed for ineffectiveness).  In sum, this viewer is left with many unanswered questions.  Of course, the ultimate irony, historically, is that Poland’s Solidarity labor movement, begun in 1980 among Gdansk dockworkers, was the beginning of the end for the bureaucratic Communist regimes of Russia and Eastern Europe.

This article was posted on Thursday, March 18th, 2021 at 9:09pm and is filed under Cold War, Film Review, Russia, The Soviet Union.