The student from Ghana was insistent. “I want to meet him.” The stubborn, well-attired fool, groomed and keen to make a good impression, was attending the Senate House ceremony in Cambridge for honorary awardees. He was not the only one. In attendance on this warm June day in 2006 were a gaggle of rascals, well-wishers and rogues. This was gawking made respectable.

The awardees were justifiably brilliant. There were the establishment birds of paradise: the Archbishop of Canterbury Rowan Williams, a man who soporifically charmed; and the Bank of England governor, Mervyn King. The mad cat mathematician’s contribution was also honoured in the form of string theorist Edward Witten of Princeton. Honorary doctorates in law were also conferred upon educator Charles Vest and writer Njabulo Ndebele. Ahmed Zewail scooped the honorary doctorate in science and novelist Margaret Drabble the honorary doctorate in letters.

The ceremony was softly coated in formal Latin, the awards themselves granted to the bright and the brightest, the hall acting as a brace of history. But it was the Duke of Edinburgh who, as ever, managed to cut through what would have otherwise been a stuffy gathering with his immemorial manner. Cambridge University’s chancellor turned up to preside, and, his cloak train held by the unfortunate subaltern, appeared like a decorated reptile, gown merged with body.

The reception – for that is what many there had hoped to get a hack at — saw Prince Philip make his various social sorties. These had the usual devastating air about them. Old mocking remarks about colonies; jabs of casual racism garnished with a mock innocence. Andrew O’Hagan of the London Review of Books was not wrong to observe that his questions would often lie “somewhere between existential brilliance and intergalactic dunce-hood.” To the student from Ghana, who sauntered up to him expecting a nugget of revelation, he said this: “I say, are you still a colony of ours?” 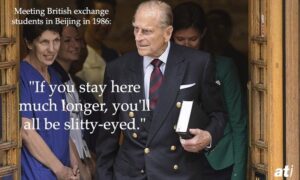 The Prince Philip treasury is laden with such remarks, the sort that inspired other family members such his grandson Prince Harry while enraging commentators such as Hamid Dabashi. To a Scottish driving instructor, the Duke of Edinburgh inquired how it was possible to “keep the booze long enough to pass the test.” To an Australian Aboriginal: “Still throwing spears?” To a group of British students on a royal visit to China: “If you stay here much longer you’ll all be slitty-eyed.”

A national treasure? A petrified disgrace? For Dabashi, very much the latter, with one redeeming feature. “He is not faking it,” railed the Columbia University professor of Iranian studies in 2017. “This is who he is — and the long panoply of his racist, sexist, elitist, misogynistic, class-privileged and unhinged prejudices is a mobile museum of European bigotry on display.”

A man such as the Duke of Edinburgh operated in a different dimension, distanced from revolutionary tremor and social evolution, even as the country he presided over with Queen Elizabeth II changed. To expect such a man to evolve with an institution created before an understanding of genetics was hope defiant of experience. He was expected to remain in the putty of permanent infantilism — at least on some level, more role than man. Accepting monarchy is accepting a condition of long service, and the Westminster model demands that the sovereign reigns but does not rule. And that role was reserved for Prince Philip’s wife, Queen Elizabeth.

So much came to massaging him into roles he did not want, and situations he would have thought peculiar. A man condemned to opening buildings most of his life is bound to get tetchy at some point, strapped to concrete, pillars and boredom. Presiding over the opening of structures can risk turning you into a monument, a biped structure condemned to endless ceremonies of tenured stiffness. Naturally, he had to assume the role of consort as robot, breaking occasionally into performance, his sparkles of misguided human observations rippling through the institutional straitjacket.

The role of service can be deforming. The Duke of Edinburgh Awards is touted as an example of “Prince Philip’s belief in the infinite potential of young people”. The Royal had a rather different view of it: the awards were not to be celebrated as some deep, insightful contribution to society. It was simply something to do. At points, he seemed to have strange attacks of modesty. On one occasion, he admitted that his greatest speech involved the utterance of a few words: “I declare open the Olympic Games of Melbourne, celebrating the sixteenth Olympiad of the modern era.”

In the biography of the queen mother by William Shawcross, we find a note written by a newly married Prince Philip to his mother-in-law, touching in so far as it shows an awareness of role and position. “Lilibet is the only ‘thing’ in this world which is absolutely real to me and my ambition is to weld the two of us into a new combined existence that will not only be able to withstand the shocks directed at us but will also have a positive existence for the good.”

A profound shock was the emerging force of media scrutiny, prompting him to call it “a professional intruder”. That was, is, its job, so you could not “complain about it.” So, in front of the media, he would be able to tell the young children’s rights activist and Nobel Peace Prize winner Malala Yousafzai that children went to school because parents wanted them out of the house. Many wearied parents would have agreed; even the youthful Malala stifled a giggle.

The river of tributes duly flowed on the announcement of his passing. Few were more suited to delivering one than Britain’s Prime Minister Boris Johnson. The Prime Minister, in various previous incarnations, had merrily offended a good portion of the earth’s nations and races. “Prince Philip earned the affection of generations here in the United Kingdom, across the Commonwealth and around the world,” said the Prime Minister. “By any measure, Prince Philip lived an extraordinary life — as a naval hero in the Second World War, as the man who inspired countless young people through the Duke of Edinburgh’s Award and, above all, as Her Majesty The Queen’s loyal consort.”

Not much difference was noted on the Labor side of politics. “The United Kingdom,” wrote Sir Keir Starmer, “has lost an extraordinary public servant in Prince Philip.” He noted a life marked by dedication to country, a distinguished career in the Royal Navy during conflict, and decades of service.

From outside Britain, Barack Obama was off the mark, unable to resist the urge to be modern and very contemporary. “At the Queen’s side or trailing the customary two steps behind, Prince Philip showed the world what it meant to be a supportive husband to a powerful woman.”

From the European Union, there was understanding without hyperbole. European Commission President Ursula von der Leyen preferred a no-nonsense approach, expressing her sadness and extending “sincere sympathy to Her Majesty The Queen, the Royal Family and the people of the United Kingdom on this very sad day.”

During the reception of the honorary graduands that day in 2006, the strawberries being readily consumed, the champagne flowing like arteries let, Prince Philip could still muster a few remarks, speared, sharpened, and directed. He mocked those who had not been to Cambridge, geniuses who never had the chance to go to that great educational wonder in the Fens. “Is it true that there are actually a few of you who did not go to Cambridge?” To see him in motion was to see an institution within a man, bones and flesh going through tasks he did with a certain measure of irritation and resignation. The heat of battle must have been much more fun.

This article was posted on Friday, April 9th, 2021 at 7:58pm and is filed under Colonialism, Obituary, Racism, United Kingdom.