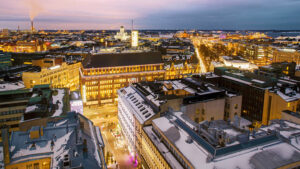 In addition to solving Helsinki’s own challenge, the Helsinki Energy Challenge aims to find solutions with potential to solve global decarbonisation targets outside Helsinki and Finland as well (photo: Yiping Feng and Ling Ouyang)

The Helsinki Energy Challenge. Who could refuse? The opportunity to solve the apparently insoluble. To reform the energy supply for one of the world’s most charismatic and effective cities to be low carbon, utterly reliable, and reasonable cost. And to do so with de minimis hydrocarbons and biomass!

Helsinki is a cogeneration city, where some 93% of the buildings are connected to district heating. However, we depend on hydrocarbons, and within that, coal.

This was an opportunity to reconcile the paradox — we all want greener heat, but large scale biomass – hitherto recommended by energy consultants — is not the solution.

And if the reward of entering such a contest wasn’t enough, there was a large prize money. But a winning entry really had to solve the problem.

So, what should we take away from the competition and the winners?

First, 252 entries, from 35 countries! To have attracted this kind of attention and effort is an enormous accomplishment.

Second, the apparent quality of entrants. The preliminary assessment gave only 10 of the eligible 226, the top mark of “10”. A further 40 received marks of 7 or 8 (there were no “9”s). A very small number of teams were judged not to be sufficiently qualified.

Third, the process was transparent, straightforward, and relatively simple. The process included a preliminary judging round, then an invited co-creation session with ten finalist entries.

Fourth, a jury team with wide-ranging independent expertise. (However, from the 6 juries, none was an urban planner or architect.)

However, as to the winners, we take away less.

All the winning entries had something in common — none were fully practicable. In fact it could be said that all had fatal flaws. They either used a known technology in an unknown or previously not scaled way, or used it in a way that required sacrifice elsewhere in the system. One technology turned the heating equation into a giant marketplace — the theory being that a purely capitalistic approach will bring the right answer at an affordable price.

No wonder the contest administrators had no definitive answer for how these ideas would be used.

What is disappointing is that no “reference plan” was identified as a winner. At best the winning entries were sketches of partly plausible technologies with significant if not fatal tradeoffs, or at worst, fantastical bets.

So, what was this about, really? Was it just a very, very expensive way to generate ideas?

Yes, but there is a deeper point. The Challenge can be seen as about psychology as well as physics. The Judeo-Christian ethic has at its core the possibility of apocalypse. Climate change has been defined on such terms. It either means changes to the lifestyles we have or a radically inhibited lifestyle in the future.

To avoid this tragedy it suggests that political and scientific willpower can overcome these hurdles. The climate crisis is painted as a test of willpower and imagination.

The Helsinki Energy Challenge was an expression of the challenge and the ideal. The HEC offered the possibility that talent could square this circle, that inviting the world community to this charismatic problem could bring out a technocratic solution that would, ideally, involve the fewest tradeoffs.

However such an ideal ignores the reality of physics and runs the danger of substituting a projection. We projected onto the HEC our own fantasy that the paradox of climate change could be resolved without significant tradeoffs.

The transition that is widely prescribed is about the substitution of low density energy for our history of high density energy. The primary goal is the elimination of hydrocarbons.

The Helsinki Energy Challenge judges might have seen this when they reviewed the entries during the first pass. And yet, the winning entries were declared and €1m of taxpayer money was paid as prizes. This was made obvious not only by the holes in the recommendations of the 10 chosen, and by the absence of half of the jury at the event and the hesitant and vague answers of the organizing committee and of Helsinki’s mayor (Jan Vapaavuori), upon questions related to the “when and what next?”

The jury could have taken a more courageous route: to stop the challenge in the first round, to call attention to a teachable moment.

If we, as a society, commit to removing the effects of hydrocarbons, then we are going to need to dig deeper than hoping that technology + political willpower will bring solutions.

The Helsinki Energy Challenge was an expensive exercise not in a scientific planning function, but in a projection of our collective fantasy. Having defined the problem in apocalyptic terms, as we have the problem of climate change, we then invest in displacement activity to deny the tragedy.

There were 252 entries, of which 5 were selected for prize or recognition. Buried in those less idealistic proposals are very likely the practical solutions the city needs. But we, the general public, will never see them.

Climate change is real. But so are the laws of thermodynamics. Humans have harnessed thermodynamics to adapt to a planet that is intrinsically hostile to people in a relatively short period of time. The earth is continuing to evolve. A city such as Helsinki has no need to frame problems in apocalyptic terms. More realistic approaches are needed. More prize money is not.

Pedro Aibeo, Mark Linder & Stefan Gustafsson are partners in Architectural Democracy. And yes, they did submit an entry to the HEC.

This content originally appeared on Dissident Voice and was authored by Pedro Aibeo.