The congressional hearings examining the January 6 riot at the Capitol, which were egged on by outgoing President Donald Trump and his false claims that the election had been rigged against him, have often emphasized the perspective of the Capitol Hill Police. The congressional hearings examining the insurrection portrayed the police as both heroic guardians of democracy and the victims of an unprecedented and surprising far-right hostility that escalated into violence (CNN, 7/27/21). 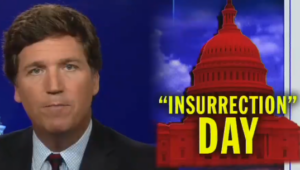 For the past year and  a half, a large part of the schism between left and right in US politics has been on the question of policing. The Black Lives Matter protests that erupted last year after the killings of Breonna Taylor and George Floyd affirmed the idea that a radical overhaul of policing was a central platform of the anti-racist left. Solidarity with police, summed up in the phrase “blue lives matter,” has become a rallying call for the right against rising left-wing criticism of police (Boston Globe, 11/1/20), particularly the movement to “defund police” by transferring resources to agencies that are better suited to meet community needs.

At first glance, then, there seems to be a contradiction when Fox News attacks the Capitol Hill officers as traitors. Fox News host Laura Ingraham mocked Capitol Police testimony (7/27/21), likening their accounts to award-winning acting (Newsweek, 7/28/21), and her colleague Tucker Carlson (7/21/21) verbally attacked a Capitol Hill police officer who gave a harrowing account of his defense of the building from violent, far-right rioters (CNN, 7/22/21).

Since when do Republicans care more about criminals in jail than the cops who put them there? Since when do they coddle domestic terrorists? Since Donald Trump.

Citing the Daily Beast (7/30/21), Dowd said that Trump has been leading his party’s efforts to recast what happened on January 6 by “belittling some police heroes.” 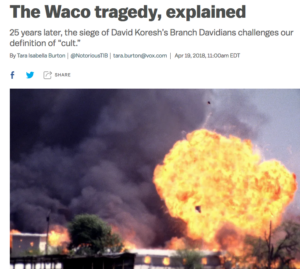 Dowd’s diagnosis misses the mark in an all-too-typical way, casting as a novel Trumpian phenomenon something that has long been a factor on the US right. In fact, the right wing, and the Republicans who serve as their electoral vehicle, have shown hostility toward federal law enforcement agencies for decades, especially since a 1992 stand-off between fugitive white nationalist Randy Weaver and federal officers (FBI, Marshals and the Bureau of Alcohol, Tobacco and Firearms) at Ruby Ridge, Idaho, resulted in the death of one federal agent and Weaver’s wife and 14-year-old son (Guardian, 8/26/17).

During congressional hearings about the standoff, the Chicago Tribune (9/14/95) noted that the public witnessed “the novel sight of Republican lawmakers railing against the mistreatment of a convicted felon by overzealous police.”

In contrast, “Speaker Newt Gingrich, Majority Leader Dick Armey, Judiciary Committee Chairman Henry Hyde and Crime Subcommittee Chairman Bill McCollum” blasted the Democratic White House for criminal justice reforms they saw as tying the hands of local police. Hyde said the administration was “very concerned about the rights of the accused,” while Republicans “are very concerned about the rights of society and the victim.”

The 1993 FBI raid on the Branch Davidian sect outside Waco, Texas, which killed 76 civilians, including 25 children, also became a rallying cry for the right against federal overreach (Vox, 4/19/18). Once again, in the long run, this resulted in the Republicans effectively taking a “defund the police” line. Mother Jones (1/17/13) reported:

In 2003, Rep. Todd Tiahrt (R-Kan.) inserted a series of amendments into a Department of Justice appropriations bill that prohibited the ATF from sharing information on weapons traces to the general public—effectively restricting researchers from detecting trends and potential loopholes in current policy….

The same year, Congress, backed by the NRA, split the ATF off from the Department of Treasury and stipulated that its director be confirmed by the Senate, effectively giving the gun lobby veto power over who would run the agency.

In 2014, Fox News host Sean Hannity offered solidarity with the Bundy family as it engaged in a standoff in Nevada with the Bureau of Land Management (Media Matters, 4/21/14). The Bundys had the support of prominent Republican officials; “These people are patriots,” declared Nevada’s Republican Sen. Dean Heller, even as his Democratic counterpart, Sen. Harry Reid, called them “domestic terrorists.”

The right kind of federal power

And yet there are federal agents the right does like. For example, Fox News (5/29/19) lambasted the slogan “Abolish ICE” after massive protests erupted against the Trump administration’s detention of immigrants. Going so far as to report positively on both a union and a federal law enforcement agency, the network showcased the Border Patrol agents union’s praise for the Trump administration’s anti-immigration efforts (Fox News, 7/17/17). 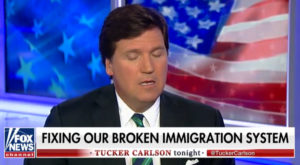 Dowd is incorrect that Trump changed everything; he simply added on to a long contradiction. But the contradiction is easy to understand. Agencies like the BATF stand against important conservative principles like gun ownership. The FBI, which has been central to battling radical environmentalists (Rolling Stone, 6/21/11) and an expanded role in the War on Terror after 9/11, is also a villain for the right because of its role in Ruby Ridge and Waco.

The contradiction has compounded ever since the FBI began probing Trump’s alleged connections to Russia. Trump ally Rudy Giuliani, whose entire political persona is based on aggressive policing in New York City, likened the FBI to Nazi stormtroopers (New York, 5/3/18). So, again, Dowd is wrong that the party had to “suddenly…go along with Trump’s crooked ways and Deep State vilification of the FBI.” That sentiment predates him.

ICE and BP keep borders secure, so they’re OK in conservative media that fetishize strict immigration restrictions. Capitol Hill Police, on the other hand, aren’t there to protect the American public from criminals, the conservative mindset says, but rather to protect an all-too-powerful federal government from the people, a security force for a central government out of control.

It’s important to understand why these contradictions exist, because they point to what the right-wing political movement, and its spokespeople in the media, actually value: “law and order” in the urban centers; anti-immigration policies, gun rights and, above all, a weakened federal government for things other than securing borders and the military. The New York Times should know this, too.