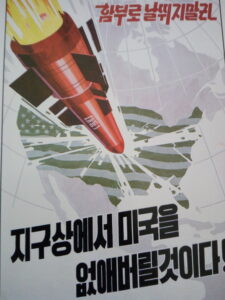 Foreign Affairs (FA) magazine, published by the right-wing Council on Foreign Relations, has recently published some articles on taking advantage of economic challenges faced by North Korea. On 29 July, FA says, “Change is underway on the Korean Peninsula. FA posits that sanctions have worked for the US, as can be gleaned from the article’s title: “A Grand Bargain With North Korea: Pyongyang’s Economic Distress Offers a Chance for Peace.” The title is also disingenuous in the extreme since former US secretary-of-state Colin Powell made it clear: “We won’t do nonaggression pacts or treaties, things of that nature.”

FA posits a re-prioritization in North Korean governance whereby the military will now play second fiddle to the economy. This, says FA, “sets the stage for efforts to resuscitate North Korea’s dying economy.”

Why is North Korea’s economy in the predicament that it is? FA, presumably attributes the economic difficulties to military overspending. But FA’s analysis downplays the deleterious effects of sanctions spearheaded by the United States against North Korea. It does admit to this further down in the article, and it also points to the adversity imposed by “COVID-19 restrictions … and a relentless series of natural disasters.” However, why would anyone sanction a country beset by natural disasters and disease? And North Korea, despite whatever skepticism, does not list itself as having any COVID-19 cases.

FA notes, “Kim’s criticisms of U.S.-South Korean joint military exercises and his country’s firing of cruise missiles and short-range ballistic missiles have also been more notable for their level of self-restraint than for escalating tensions on the peninsula.”

However, North Korea has already demonstrated that it has a nuclear weapon and that it has long-range delivery capability. It is obvious that if any actor were to attack North Korea that the aggressor would be punished. Any reading of this exposes a hypocrisy, on the one hand North Korea is considered “notable for their level of self-restraint” and not “escalating tensions on the peninsula.” On the other hand, the US and South Korea conducted joint military exercises in late August. Is this self-restraint or is it provocation? Was not the seizure, announced by the US Justice Department in July, of a tanker that transports oil to North Korea a provocation? 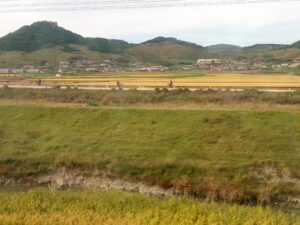 FA points at food shortages in North Korea. However, it is important to remember that during US intrusion into the Korean civil war, the US wiped out the economic and agricultural basis of North Korea and killed millions of North Koreans. Following its aggression of North Korea, North Koreans have been forced to endure hardship to remain independent of their attacker. Absent this historical background, one might be fooled by FA’s attempt to create an image of American benevolence when it writes: “Kim [Jong-un] is treading carefully on the military front so as not to foreclose the opportunity for dialogue with the United States, which could serve as a guarantor of his country’s future economic security.”

North Korea does not need an economic guarantor, it needs the US to stop sabotaging North Korea’s economic efforts.

For U.S. President Joe Biden and South Korean President Moon Jae-in, Pyongyang’s shift represents an opportunity. They should aim to resolve North Korea’s underlying security concerns—particularly its economic security—in return for progress on denuclearization, the reduction of Pyongyang’s dependence on China, and North Korea’s eventual integration into the U.S.-led liberal international order with the close support of South Korea.

FA posits North Korea handing over its defense and integrating into the “U.S.-led liberal international order” with the close support of South Korea while at the same time poking a stick in the eye of China. North Koreans are extremely aware of their history and how the US separated the Korean people, conducted a scorched earth campaign in the northern part of the peninsula, and they are well aware that China came to fight alongside them to defeat the US. It is risible that anyone would posit that North Korea would relinquish its independence, its juche, and ally, to be led by its aggressor.

FA argues, “Achieving superior joint military and diplomatic power is what will enable the allies to deter Kim’s threats, allowing for a new approach to North Korea that can pave the way to a lasting peace.”

How will the US achieve this? To threaten North Korea with “superior joint military and diplomatic power”? Peace from the barrel of a gun and deadly sanctions? North Korea succeeded in achieving nuclear capability to punish any military attack against it. In the meantime, North Korean chairman Kim Jong-un can achieve economic development by joining the Chinese-initiated BRI and further opening up to Russia.

FA portrays the US-South Korean summit in May where the US committed to providing South Korea with COVID-19 vaccines as sending “a powerful signal to South Koreans that the United States is placing a high priority on the relationship.”

The Diplomat asked, “Why isn’t South Korea Buying Chinese Vaccines?” It noted, “Like many Asian countries, Seoul is having troubling sourcing vaccines. But unlike its neighbors, South Korea has so far refused to turn to a ready supplier: China.” The article states, “Part of the problem is that the South Korean government is still eagerly and persistently seeking vaccine supplies from the United States.” China’s Global Times reported, “After the World Health Organization (WHO) officially approved two Chinese-made COVID-19 vaccines, South Korea became the first country to fully exempt travelers vaccinated with shots of Sinopharm and Sinovac from its original mandatory two-week quarantine” on 1 July. It seems a prudent move to maintain good relations with South Korea’s largest trading partner, China.

FA has further scorn for China. It accused China of “bullying” South Korea over its apoplexy regarding the deployment of the US Terminal High Altitude Area Defense (THAAD) missile defense system in 2016 — a system which can be used against China.

The US places military armaments a continent away from US shores — a hop, skip, and jump from China — and FA accuses China of bullying? How would the US feel if such a missile-interceptor system were placed in Cuba by China?

FA promoted an end-of-war declaration that “would not be linked in any way to a peace treaty.” Other steps are demanded before consideration of a peace treaty between the parties. One is a non-starter: the verified destruction of nuclear weapons by North Korea. Of course, only by North Korea, the US will keep its nuclear weapons. As a test of the US’s word, imagine the American reaction if North Korea agreed to denuclearize, as long as the US also destroys its nuclear weapons, as is required by the Nuclear Nonproliferation Treaty’s article 6, which the US signed on to.

In a September article, “The Last Chance to Stop North Korea?: U.S. Aid Could Help Revive Nuclear Diplomacy,” FA seems to have had its druthers about the late July article that envisioned coercing North Korea through “superior joint military and diplomatic power” and now supports humanitarian aid as the way to denuclearization. 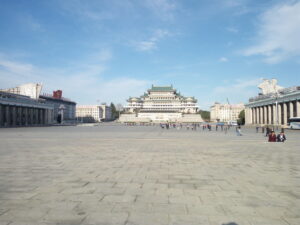 Kim Il Sung Square in the center of Pyongyang

The subtitle should give pause to most informed readers. First, consider what is meant by “nuclear diplomacy” in this context. It means that a country (especially the northern half of a country) that was devastated by an American scorched earth campaign, one that used bioweapons and chemical weapons — and even threatened attack with nuclear weapons, should disarm itself of a deterrent while the aggressor maintains its nuclear arsenal. Furthermore, just what is US aid? The Democratic Republic of Korea does not need US aid; it needs an end to US-led international sanctions against the country.

Despite noting US participation with South Korea for military exercises, FA writes that “the Biden administration should not take comfort in the relative lack of [North Korean] provocations” recently.

This wording seems particularly one-sided. Are the South Korean and US military maneuvers (including training previously of a decapitation unit) not provocative? Is the stationing of US troops in South Korea not provocative? Consider what the reaction would be if North Korea held military exercises off the American coast?

FA attempts to evoke fear of the North Korean menace:

“… these [North Korean] tests aren’t the only troubling signs. … the reprocessing of plutonium and enriched uranium for an arsenal of bombs now estimated to number between 20 and 40. … The direction is clear: North Korea wants to have a modern force that can engage in nuclear warfighting, that can threaten the United States with missiles that can carry multiple warheads and are impervious to ballistic missile defenses, and that can survive and retaliate credibly against a U.S. preemptive attack.” [italics added]

This appears to be just a risible posturing. How is it that North Korea would threaten the United States? Through the mere development of its military capability? Such logic would apply to every country that seeks to upgrade its military. Are all these countries then threatening the US? Moreover, would it be responsible for a government to allow its defensive capability to lag behind that of a belligerent parked next door? A belligerent that eschews a peace treaty. A belligerent that refuses to adhere to a no-first use of nuclear weapons as North Korea does?

The FA article then complains that the improved military capability “would make it more difficult for the United States to preemptively strike a missile before its launch. These are all capabilities that make North Korea’s nuclear deterrent more survivable and impervious to a U.S. first strike.” A contradiction arises; now the writer has positioned the US as a preemptive threat. So, in essence, the writer defies all logic by preposterously postulating that a country enhancing its survivability and deterrence against a preemptive external attack makes it the threat.

But FA has a solution on “how to stop North Korea before it crosses this threshold”: “getting diplomacy back on track through humanitarian assistance that includes American COVID-19 vaccines and food aid, both of which the country needs.”

Providing US aid would serve American hegemonic aims in that it “would reduce Chinese influence in Pyongyang.” Seems to be rather self-serving aid. Sanction a nation, intercept North Korean shipping at sea, then take advantage of any economic deterioration to pose as a generous benefactor by proffering aid.

Does one dare trust the word of the United States? Look no further than what happened to Muammar Gaddafi and Libya when it abandoned its nuclear weapon program, what happened when Saddam Hussein’s Iraq allowed inspections for weapons or mass destruction, or when Syria’s Bashar al-Assad surrendered Syria’s chemical weapons. 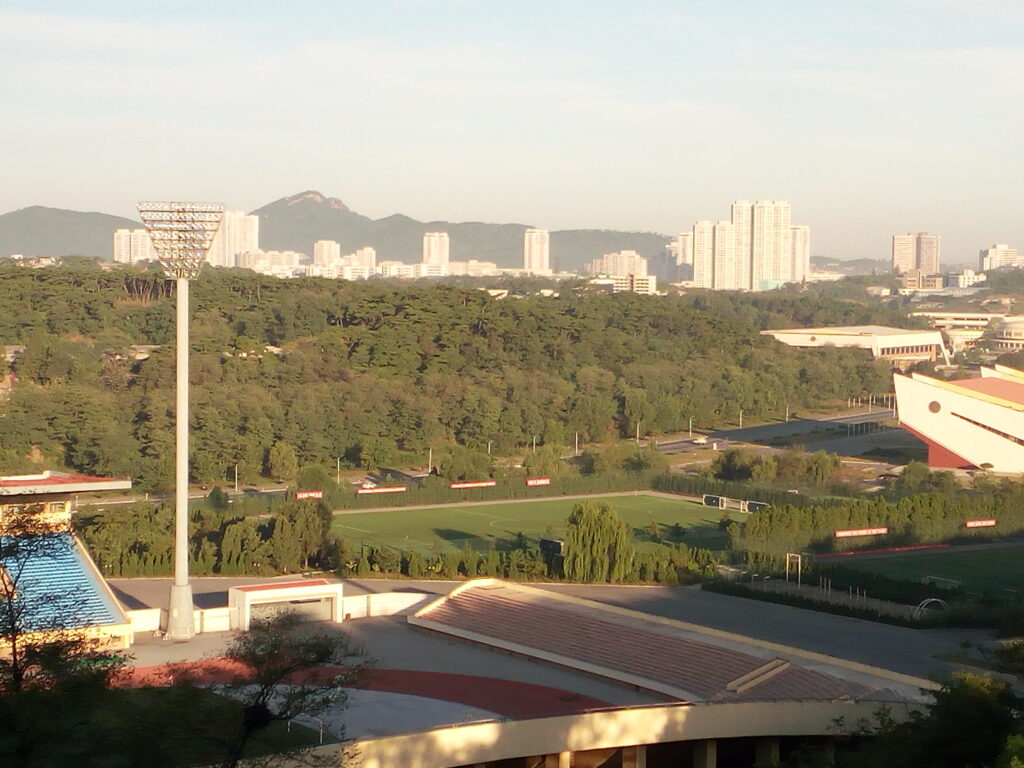 As A.B. Abrams expressed with crystal clarity in his excellent book, Immovable Object: North Korea’s 70 Years at War with American Power, that North Koreans are well aware of how American imperialism works, of its military depravity, and its proclivity for disinformation. North Korans have demonstrated resistance, resilience, and self-reliance. It has served them well since the armistice was signed on 27 July 1953. North Korea is an economically sanctioned country, yes, but it is not an economically stunted country. North Korea has achieved so much. It provides tuition-free education right through university, universal health care, preschools, and housing and jobs for all its citizens. It is a country that despite the destruction it suffered from US-led UN warring has achieved military deterrence and social development that Americans can only dream of. It is an independent country neither rich, neither poor.

All photos by Kim Petersen, copyleft.

The post The Entire Korean Peninsula as an American Satrapy? first appeared on Dissident Voice.