In one of the grimmest periods ever for reproductive rights, advocates are scrambling to react to a spate of new restrictions on abortion. The Biden Justice Department filed a lawsuit against Texas in the wake of S.B. 8, the state’s new law that invites private citizens to enforce abortion bans through civil litigation. House Democrats passed the Women’s Health Protection Act, a bill that would protect abortion providers and remove barriers for patients. And some advocates see hope in medication abortion, a combination of two drugs — mifepristone and misoprostol — which people can take to safely end pregnancies.

But many states still restrict where providers can mail drugs, and most groups still only service states with relatively friendly abortion laws. Last week, a Republican state representative in Florida introduced a bill that mirrors S.B. 8, and lawmakers in other GOP-controlled states have signaled interest in following suit. The U.S. Supreme Court has refused thus far to block Texas’s notorious statute, and the Women’s Health Protection Act stands little chance of passage in the Senate.

As long as the Senate filibuster remains in place, and the U.S. Supreme Court maintains its anti-abortion majority, advocates in the South say there’s little that Washington can really do to aid their plight. There is one crucial method, though, which often falls off the radar: Medicaid expansion.

“What people have forgotten is [in] this entire swath of the southeast, from Texas and Georgia and Florida, we never got Medicaid expansion, so there’s a lot of people, especially people capable of becoming pregnant, unable to access any sort of insurance,” said Robin Marty, a journalist, activist, and head of operations for West Alabama Women’s Center, an independent abortion clinic in Tuscaloosa. “We need national organizations to remember that we’re still five steps behind. While they’re trying to get new medication abortion programs standing, we’d like to even use the [Affordable Care Act] birth control mandate.”

As Congress considers proposals to include in the upcoming reconciliation bill — a $3.5 trillion social spending package that Sens. Kyrsten Sinema, D-Ariz., and Joe Manchin, D-W.Va., are threatening to derail — Democrats are weighing at least two measures that would expand Medicaid access in the 12 states that have refused. One pathway, led by Democratic Sens. Raphael Warnock and Jon Ossoff of Georgia and Tammy Baldwin of Wisconsin, would create a program that’s like Medicaid but administered by the federal government rather than by individual states. Their proposal would require the Centers for Medicare and Medicaid Services to offer coverage to those eligible in the 12 holdout states. Texas Democratic Rep. Lloyd Doggett also has a bill that would allow cities and counties to expand Medicaid in states that have refused. And some powerful lawmakers, including House Majority Whip Jim Clyburn, D-S.C., have cited Medicaid expansion as a top priority for inclusion. Sen. Jon Ossoff, D-Ga., speaks on Medicaid expansion and the reconciliation package during a press conference with fellow lawmakers at the Capitol in Washington, D.C., on Sept. 23, 2021.

The cost for expansion so far is estimated at potentially $250 to $300 billion, but the price could shrink if legislators put an expiration date on their plans. Clyburn suggested last week that he would back a few years of Medicaid expansion, which he said could be harder to strip away once it’s in place.

Lawmakers are under pressure to reduce the cost of the reconciliation package — despite the fact that the $3.5 trillion price tag would be spread over 10 years and partially covered by raising taxes on the wealthy — and several health care priorities are competing for space. These include expanding Medicare, bolstering Obamacare subsidies, and ensuring access to in-home care for the elderly. A Washington Post report on Thursday made the chances for a permanent Medicaid expansion look less likely: Some advocates and Democratic senators expressed concern that it might reward recalcitrant GOP lawmakers, or even incentivize states that have expanded Medicaid to reverse course, potentially forcing the federal government to pick up the tab for states that had previously expanded Medicaid.

There are more than 2 million poor, uninsured adults in the so-called Medicaid gap. Of those, roughly 800,000 are women of reproductive age. Most people who fall into the gap are unlikely to afford insurance on the individual marketplace because they’re ineligible for premium subsidies, which help offset high monthly costs. And while the Affordable Care Act applies to most private insurance plans, according to the Guttmacher Institute, 13 percent of workers in 2019 were enrolled in “grandfathered” plans exempt from the ACA’s protections — including the mandate for contraception coverage.

In Washington, D.C., and 38 states that have expanded Medicaid since 2014, public health researchers found an immediate and large increase in insurance coverage for low-income women of reproductive age. Health and economics researchers also found that low-income women in expansion states were more likely to use effective birth control methods during their postpartum period than their counterparts in holdout states, and were more likely to use long-acting reversible contraception, considered among the best methods for preventing unwanted pregnancies. The proposed Medicaid expansion plans would increase access to birth control and reproductive services in the remaining 12 states.

On Tuesday, Planned Parenthood Federation of America issued new fact sheets detailing what Medicaid expansion would mean for each state that has until now resisted broadening coverage. In Alabama, for example, Planned Parenthood says 51,000 women of reproductive age would gain access to affordable health insurance, including more than 20,000 Black women. In Texas, more than 324,000 women of reproductive age would gain affordable health insurance and access to services, including 48,000 Black women and 1930,000 Latina women.

“I can’t tell you how many people I’ve seen who wanted birth control and were not able to get it,” said Marty. “The county health departments are booked two to three months in advance, so by the time they get there it’s too late; and then we have patients who do have private doctors, but the doctors are denying them the coverage.”

Jamila Taylor, the director of health care reform and a senior fellow at the Century Foundation, said expanding Medicaid could definitely help support women who fall into the coverage gap, who lack insurance or access to comprehensive maternal services. “We know this affects people not ready to be parents, and those who are ready to have children,” she said.

So if either the Ossoff-Warnock-Baldwin plan or the Doggett proposal passes, the changes could expand access to contraception for thousands of currently uninsured people. But would they allow Medicaid to cover solutions like medication abortion? Thanks to the Hyde Amendment — a prohibition on using federal funds to cover abortions outside of the exceptions of rape, incest, and endangerment to a woman’s life, which Congress has reauthorized every year since 1976 — the answer is still no. 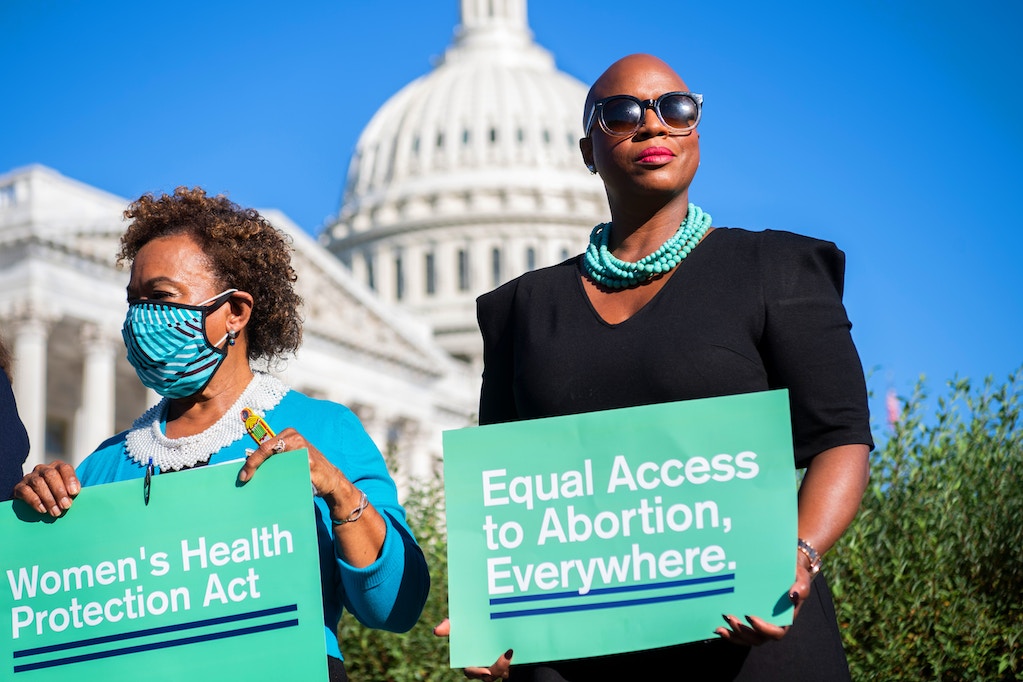 There is legislation pending in the House and Senate, called the Equal Access to Abortion Coverage in Health Insurance Act of 2021, or EACH Act, that would overturn the Hyde Amendment — but like the Women’s Health Protection Act, it stands little chance of passage with the filibuster in place. On Wednesday, Manchin told the conservative National Review that he was open to considering Medicaid expansion as part of reconciliation — but only if the package includes the Hyde Amendment. States can, however, still opt to use their own Medicaid funding to cover abortions, and 16 primarily blue states already do.

As long as the Hyde Amendment remains in place, those living in regions at odds with reproductive health access will have to rely on more difficult and sometimes risky measures to terminate their pregnancies. If the amendment were repealed, Medicaid funds could potentially be used to prescribe medication abortion, offering an alternative in places where clinics are closed. But many hostile states have broadened their anti-abortion measures to cover mifepristone and misoprostol. Since April, lawmakers in Republican-led states, working closely with anti-abortion groups like the Susan B. Anthony List, have moved to pass even more restrictions on medication abortion.

Marty, who authored “Handbook for a Post-Roe America” in 2019, said for now people should consider obtaining medication abortion pills before they are pregnant, a process known as advanced provision. Some are are already doing this in Texas through Aid Access, an organization based in Europe that a Dutch doctor started in April 2018.

“At this point [activists] do not believe that someone who takes this step is under threat of a lawsuit because pregnant people are explicitly excluded from [SB8], but it could be a potential lawsuit if that person who ordered it gave it to someone else,” said Marty.

But shipping pills from Europe can result in delays. “Hypothetically, there might be people who try get ahold of medication abortion from one of these online retailers despite living in a different city,” said Marty, referring to U.S.-based telehealth organizations like Abortion on Demand. In those cases, which could also present legal risk, women might ask contacts they know living in more abortion-friendly states to obtain the medication and then quietly mail them the pills.

“As an author and activist, I firmly believe that all people need to be [ready] for when abortion is completely illegal and inaccessible,” said Marty. “It’s become clear to me that abortion will mostly disappear in red states.”