Modern perceptions of early modern slavery associate the institution almost solely with Africans and their descendants. Yet slavery was a ubiquitous institution in the early modern world…The story of European colonialism in the Americas and its victimization of Africans and Indians follows a central paradigm in most textbooks. The African “role” encompasses the transportation, exploitation, and suffering of many millions in New World slavery, while Indians are described in terms of their succumbing in large numbers to disease, with the survivor’s facing dispossession of their land. This paradigm—a basic one in the history of colonialism—omits a crucial aspect of the story: the indigenous peoples of the Americas were enslaved in large numbers. This exclusion distorts not only what happened to American Indians under colonialism, but also points to the need for a reassessment of the foundation and nature of European overseas expansion.

The Commission majority voted for key recommendations, including the following: The United States expects all nations to live up to their treaty obligations; it should live up to its own…We exchanged 400 million plus acres of land, and our way of life, and our very lives, for peace, and for the provisions that are provided for in the treaties, and a basic human dignity of having basic services for American Indian and Alaska Native people. 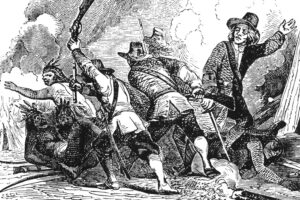 As a full-time substitute teacher in a school system on the Eastern US seaboard, I am assigned to cover for state-certified teachers who are absent from duty. I’ve had many assignments over the past couple of years including working with special education/students with disabilities, and monitoring Spanish, Math, Art, and US History classes. It was the content, or lack thereof, of the US History class that was the impetus for this article.

Students in the US History class were learning about the various Indigenous tribes located across the United States. The assignments included determining former tribal locations on a blank map of the United States using crayons, and writing a postcard about the hunting, foraging and tools/technologies of assorted tribes such as the Lakota of the Great Plains, the Haudenosaunee of the Northeast Forests, and the Kwakwa̱ka̱ʼwakw of the Pacific Northwest.

Some of the 6th and 7th grade students found the assignments boring with one saying, “What’s the point of writing a postcard.” Most liked using coloring pencils to note the locations of the tribes on the map (who doesn’t like coloring?). As far as I could tell, the lesson plans presented by the certified teachers depict the Indigenous peoples as living bucolic lives and being “one” with nature. Lessons exclude study of tribal wars over fur and Bison and, at this point in the US History class, no mention of the horrors inflicted on them by European settlers has taken place, or why that course of events happened at all. I spent a few minutes talking to the students about the Trail of Tears. They listened to my short talk with indifference. They all knew what Black Lives Matter is/stands for but were unaware of the Indigenous peoples plight other than the few tidbits they may have been told by their parents and me.

During one of the US History classes I was covering, a visiting teacher arrived and discussed, among other matters, some of the natural resources available to Indigenous peoples. He told the students that the salmon run in the Pacific Northwest was “so thick you can reach your hand in the water and grab a salmon or even walk across the river on the backs of the salmon.” I mentioned to him that the Lower Snake River Dams (Snake River is a tributary of the Columbia River) have pushed the salmon population to near extinction and with it the Salmon people’s way of life.  According to America’s Most Endangered Rivers, “The dams on the lower Snake River are an ongoing source of injustice and the loss of salmon is violating Native American rights ensured by treaty with the U.S. government. The dams and reservoirs submerged or impacted between 600 and 700 important tribal cultural sites along the lower Snake and its tributaries, thousands of acres of treaty-based hunting and gathering places, and countless graves of loved ones and sacred and ceremonial places.”

In the midst of social justice efforts such as Black Lives Matter, the Transgender Movement and even the revisionist 1619 Project, among many others, it seems that American citizens in-and-out of those movements have selective amnesia when it comes to remembering the destruction of the First Peoples by their own United States government; and, prior to that genocide, the British Colonists brutalization and enslavement of Native Americans. Why the great forgetting of Indigenous history by the American people at this late date: 2021?

Human Capital for the Taking

It is hard to know where to begin this tale of woe. It is clear that from the start Indigenous peoples were fated to be steamrolled first by British colonists and then by the US Government and the economic interests that destroyed their homelands and enslaved them. The First Peoples were viewed as intellectually and culturally inferior by British colonists and by the empire builders of the early United States and, moreover, were simply in the way of “progress”.

According to The Gilder-Lehrman Institute for American History,

the Colonists participated in Indian slave trading to obtain capital. It was as if capital could be created out of thin air: one merely had to capture an Indian or find an Indian to capture another. In South Carolina, and to a lesser extent in North Carolina, Virginia, and Louisiana, Indian slavery was a central means by which early colonists funded economic expansion. In the late seventeenth and early eighteenth centuries, a frenzy of enslaving occurred in what is now the eastern United States. English and allied Indian raiders nearly depopulated Florida of its American Indian population. From 1670 to 1720 more Indians were shipped out of Charleston, South Carolina, than Africans were imported as slaves—and Charleston was a major port for bringing in Africans. The populous Choctaws in Mississippi were repeatedly battered by raiders, and many of their neighboring lower Mississippi Valley Indians also wound up spending their lives as slaves on West Indies plantations. Simultaneously, the New England colonies near eliminated the Native population from southern New England through warfare, slaving, and forced removal.

The Biden Administration promised to increase federal funding for Indigenous peoples and followed through in March 2021 via the American Rescue Plan signed into law by President Joe Biden. It provides $1.75 billion in funding for “Indian Country” infrastructure, social services, health care and public safety. The US Department of Interior, Bureau of Indian Affairs will funnel the dollars to tribal interests.

Federal officials will meet with Native American tribes next month to gather recommendations as the federal government seeks to move ahead with efforts to protect and restore tribal homelands…Tribal leaders will be asked for advice on several topics, including the process to take land back into trust, leasing and treaty rights, among other issues under the Biden administration’s initiative to streamline steps allowing tribes to regain their land.

The two sides plan to meet in mid-October.

That’s good news but the redress efforts of the Biden Administration are tempered by the knowledge of events like the Bear River Massacre. According to the Washington Post:

The Bear River Massacre of 1863 near what’s now Preston, Idaho, left roughly 350 members of the Northwestern Band of the Shoshone Nation dead, making it the bloodiest — and most deadly — slaying of Native Americans by the U.S. military, according to historians and tribal leaders. The Indians were slain after soldiers came into a valley where they were camping for the winter and attacked, leaving roughly 90 women and children among the dead.

Martin Luther King’s comments (below) on Indigenous peoples should be mandatory reading for students and adults from sea-to-shining-sea. It is a stinging assault on the United States’ character and bitter medicine to swallow, but it’s part of American history and should not be relegated to the dust bin.

Our nation was born in genocide when it embraced the doctrine that the original American, the Indian, was an inferior race. Even before there were large numbers of Negroes on our shore, the scar of racial hatred had already disfigured colonial society. From the sixteenth century forward, blood flowed in battles over racial supremacy. We are perhaps the only nation which tried as a matter of national policy to wipe out its indigenous population. Moreover, we elevated that tragic experience into a noble crusade. Indeed, even today we have not permitted ourselves to reject or feel remorse for this shameful episode. Our literature, our films, our drama, our folklore all exalt it. Our children are still taught to respect the violence which reduced a red-skinned people of an earlier culture into a few fragmented groups herded into impoverished reservations.

This content originally appeared on Dissident Voice and was authored by John Stanton.