As the October 31 deadline to vote on the bipartisan infrastructure bill approaches, the media have made a project of examining senators Joe Manchin and Kyrsten Sinema’s opposition to the $3.5 trillion reconciliation bill, also known as the Build Back Better Act (FAIR.org, 10/6/01). Despite countless hours of coverage and conjecture about what might or might not get Manchin and Sinema to vote for the bill, the financial conflicts of interest that reinforce their reluctance to vote for the bill have been almost completely ignored. In a review of 21 relevant news programs, airing on October 3–4 on ABC, CBS, NBC, CNN and MSNBC, financial conflicts were discussed for only 45 seconds.

In fact, some in the media have attempted to help insulate Manchin and Sinema against such observations. On ABC‘s Good Morning America (10/3/21), former Sen. Heidi Heitkamp said that “impugning motivation is harmful, and I’ve seen way too much of that as it relates to both Kyrsten Sinema and Joe Manchin, and I think that needs to ratchet down.” 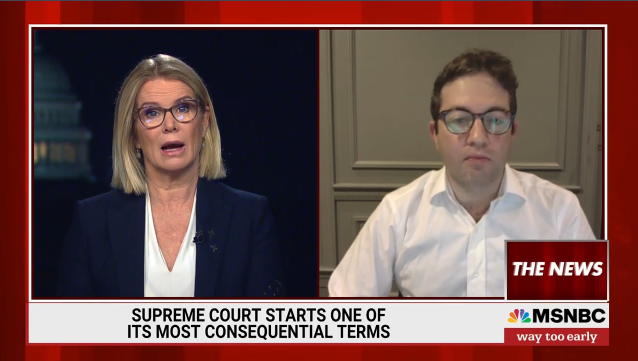 The television news media have instead chosen to engage in repetitious conjecture about what price between $1.5–$3.5 trillion might be acceptable to which parties. (One should note, as journalists rarely did, that $3.5 trillion is the cost of both spending and tax cuts over 10 years—and represents approximately 1.25% of projected US GDP over that period.)

Katty Kay of MSNBC’s Way Too Early (10/4/21) asked Punchbowl News‘ Jake Sherman, “If you had to pick a number between $1.5 trillion and $3.5 trillion, what would that number be?” Sherman replied:

Two, that seems like a safe bet, maybe a touch above two. I don’t think they could go below two. I think just mentally that would be difficult for a lot of progressives.

In interviews with progressives, anchors have taken to reminding them that their compromise is imminent. “Our correspondent says you’re going to have to settle for about $2 trillion. Is that an acceptable ceiling for you?” asked CBS‘s Margaret Brennan (Face the Nation, 10/3/21) of Rep. Alexandria Ocasio-Cortez (D.-N.Y.) Even more forcefully, NBC‘s Chuck Todd (Meet the Press, 10/3/21) asked Sen. Bernie Sanders  (I.-Vermont) if he has “accepted the fact that it’s not going to be $3.5 trillion.” 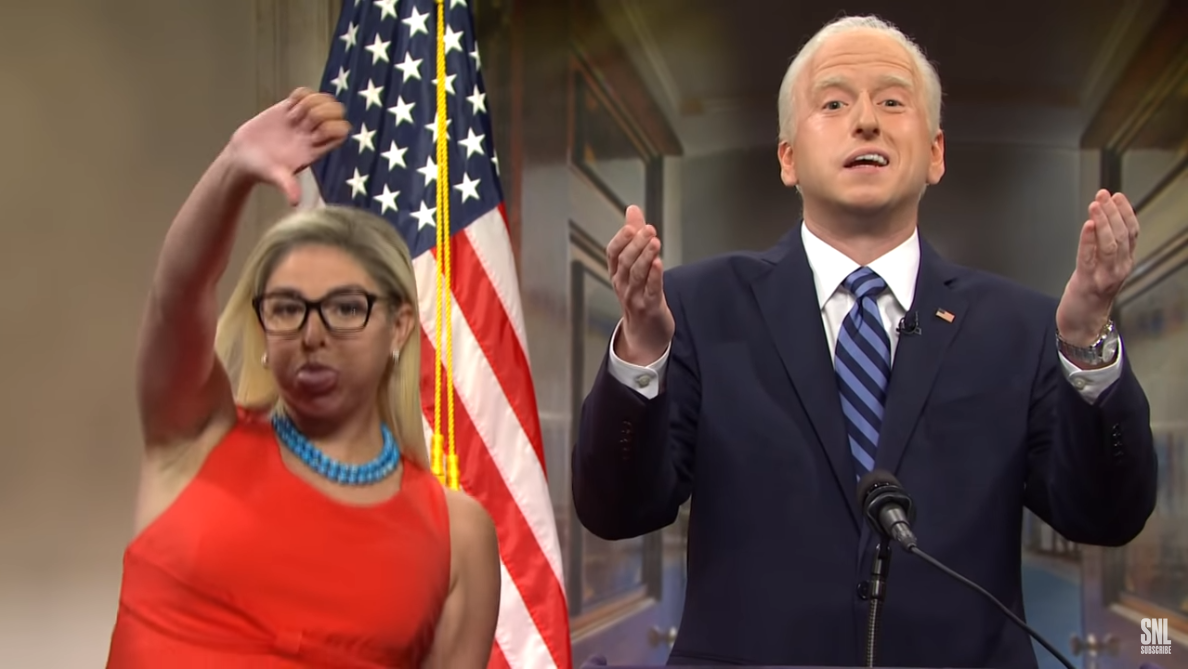 However, this bottomless appetite for numerical speculation was occasionally paused for dubious discussions about motives.  A Saturday Night Live sketch (10/2/21) about the reconciliation bill was repeated many times on the networks. The actor portraying Sinema in the sketch expressed that her opposition to the bill was because she was interested in chaos. This is not far from mainstream media’s actual diagnosis.

On MSNBC, Time‘s Charlotte Alter (10/3/21) said that “it doesn’t even really seem to be about appeasing donors ahead of a reelection campaign, because she doesn’t have to run…for reelection for years.” Alter also proposed that Sinema’s obstinance may be a branding exercise to model herself more in the party-bucking image of the late Sen. John McCain (R.-Arizona), whose nickname was “the maverick.” But that hypothesis is not so compelling when one discusses her finances.

On September 9, the Biden administration announced that the reconciliation bill would include a plan to lower drug prices by allowing Medicare to bargain with drug companies. Also on September 9, a nonprofit called Center Forward started running pro-Sinema TV, radio and digital ads; the group is funded by PhRMA, the powerful drug industry trade group that opposes the drug pricing provisions. Ten days later, Politico (9/19/21) reported that Sinema opposes the plan to lower drug prices—even though she ran in 2018 on bringing down the cost of medicine.

Her commitment to pharmaceuticals can also be observed in the “personalized medicine” caucus she started. Personalized medicine is a medical model in which every aspect of care is custom. This can be absurdly expensive, which is why many pharmaceutical companies have invested in it. In February 2020, Sinema’s website (2/4/20) announced she had “launched the bipartisan, bicameral Personalized Medicine Caucus.” Pharmaceutical employees subsequently donated $35,000 to her campaign committee. 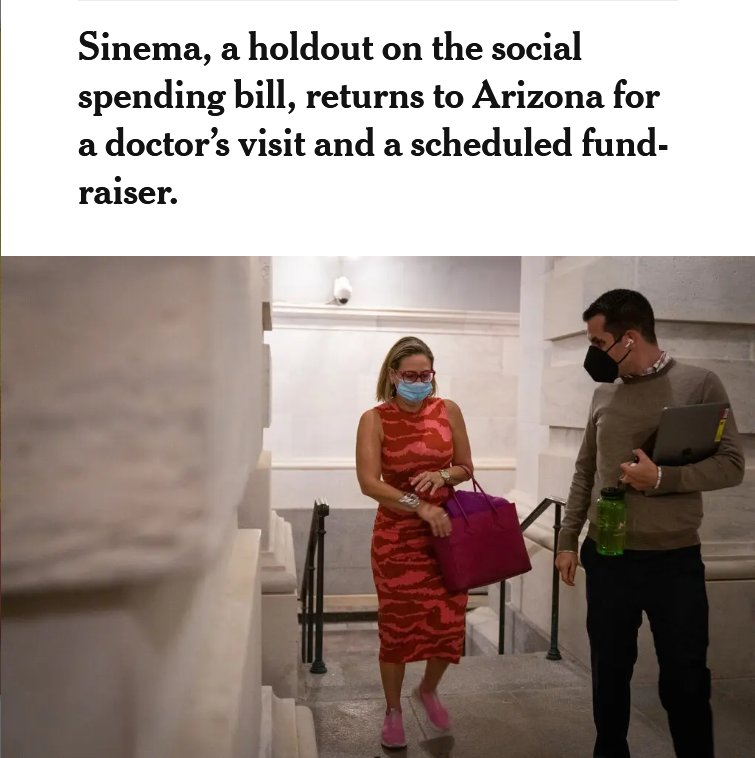 The New York Times (10/1/21) noted that Sinema’s “fundraising arm held a Capitol Hill event with five business lobbying groups, many of which fiercely oppose the bill she is supposed to be negotiating.”

Of course, her financial conflicts extend beyond pharmaceuticals. Sinema held a fundraiser on September 28 with five business lobbying groups, “many of which fiercely oppose the bill,” the New York Times (10/1/21) reported. This included lobbyists for construction interests and PACs for the supermarket industry. Members of these groups were invited to write checks between $1,000 and $5,800 to Sinema for Arizona. Despite its relevance, there were no reports of that fundraiser in any TV news episode reviewed.

Briefly mentioned, however, was her October 2 PAC retreat for donors at a resort and spa in Phoenix, Arizona. Democratic strategist David Axelrod highlighted this in a tweet (10/2/21):

Kind of takes some brass to blow out of DC for fundraisers back home in the middle of this and lecture everyone by press release on “trust.”

Axelrod’s tweet was referenced on MSNBC’s American Voices With Alicia Menendez (10/3/21). Flashing the chiding tweet was the closest most shows came to discussing the relationship between Sinema’s donors and Sinema’s positions.

This is typical of corporate media, because it is generally taboo to discuss details that naturally lead audiences to view certain politicians as corrupt or susceptible to the influence of money. Which is why the above accounts of her donors are untenable as news fodder. 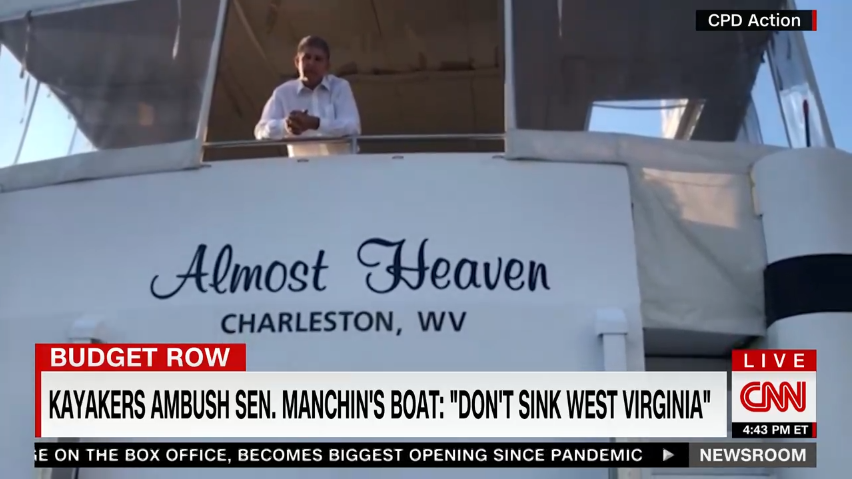 CNN (10/3/21) seemed to have more willingness to show Joe Manchin on a big boat than hobnobbing with Big Oil.

Likewise for Sen. Joe Manchin. The optics of constituents kayaking up to his houseboat seeking his submission is irresistible: Manchin, a powerful person enjoying the luxury of his wealth, stood on the back of his boat and essentially told constituents down below that they were asking for too much money. The clip was played and mocked on three of the 21 episodes. It was even used by CNN’s Newsroom With Jim Acosta (10/3/21) to kick off the discussion about the reconciliation bill. Acosta compared the scene to something from “Curb Your Enthusiasm or Veep.”

For corporate media, this is  acceptable, because making someone appear buffoonish or out of touch is a thing apart from suggesting corruption. But those constituents in kayaks probably have a very good idea of why Manchin isn’t playing ball.

Part of the Build Back Better Act addresses climate change. This includes things like tax credits for electric vehicles, and financial rewards and penalties for utility companies that meet or fall short on clean energy benchmarks. Manchin is heavily invested in companies that oppose these measures. Enersystems, a coal brokerage he founded that’s now run by his son, has earned him close to $5 million since he entered the Senate (FAIR.org, 7/27/21).

Enersystems is responsible for waste coal services at the Grant Town Power plant, the only plant in West Virginia that burns waste coal fuel. Waste coal contains more mercury than regular coal, and puts out about half as much energy.

Media could have highlighted Manchin’s remarks at The Road to Net Zero (6/8–10/21), a conference put on by the Edison Electric Institute, a utility industry lobbying group. The senator was interviewed there by the CEO of American Electric Power, a multi-state utility company that has criticized the reconciliation bill and previously donated $70,000 to Manchin. Manchin questioned the administration’s supposed rush to get off fossil fuels, saying, “I am concerned the timetable they are setting is a very aggressive timetable.”

Unfortunately, this didn’t just show an out-of-touch politician in a big boat; it suggested how he was able to afford that boat, and how that impacts US policy, and thus earned no television coverage.

Politicians part of the act 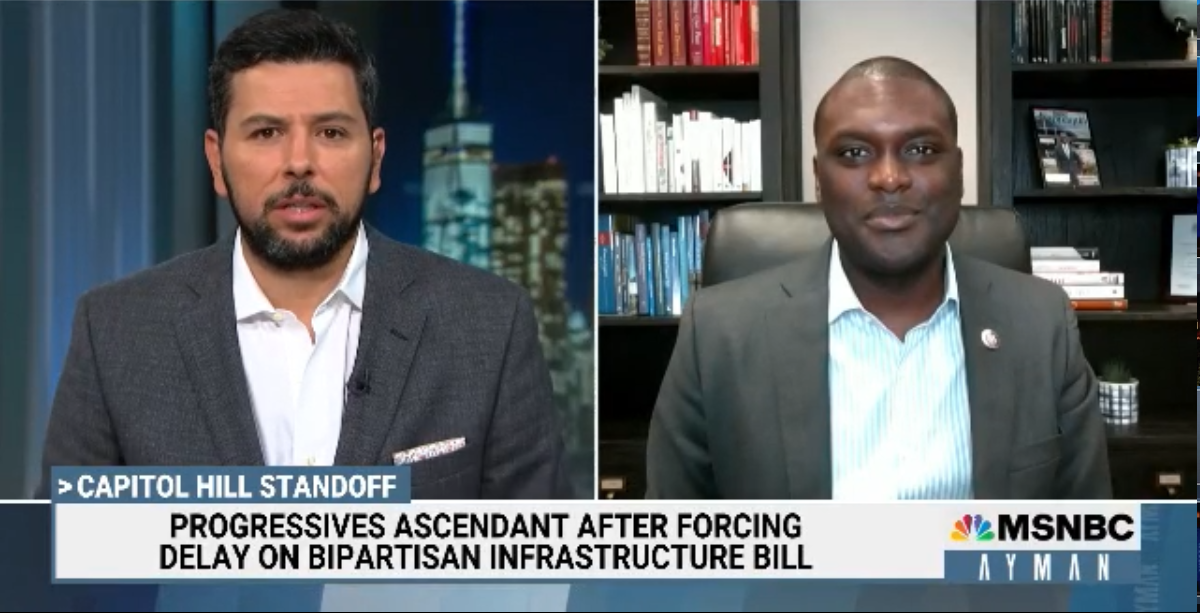 Unfortunately, politicians share the media’s deference. In every interview with a politician but one, the lawmaker echoed the unsubstantiated narrative that everyone involved is acting in good faith. There is an obvious dissonance between this narrative and the fact of Sinema and Manchin’s fundraising.

Mondaire Jones: How much money are people getting from various industries? I’m proud not to take corporate money, and many of my colleagues don’t. And generally speaking, I come from a generation of folks who are just much more willing to do what’s right for the American people, rather than compromise our values for the sake of compromise, I would submit. I think Kyrsten Sinema can raise money without doing the kind of activities she’s been doing—fleeing Washington, for example, to have a PAC retreat in the midst of negotiations.

Ayman Mohyeldin: Yeah, I was just going to say the same exact thing. New York Times reporting that she was back in Arizona this weekend to attend  fundraisers…. You got to wonder who her big interest, special interest donors are, and whether or not they have a stake in the outcome of these two bills.

In the 21 programs reviewed, this was the single explicit exchange where fundraising was mentioned in conjunction with political positioning. 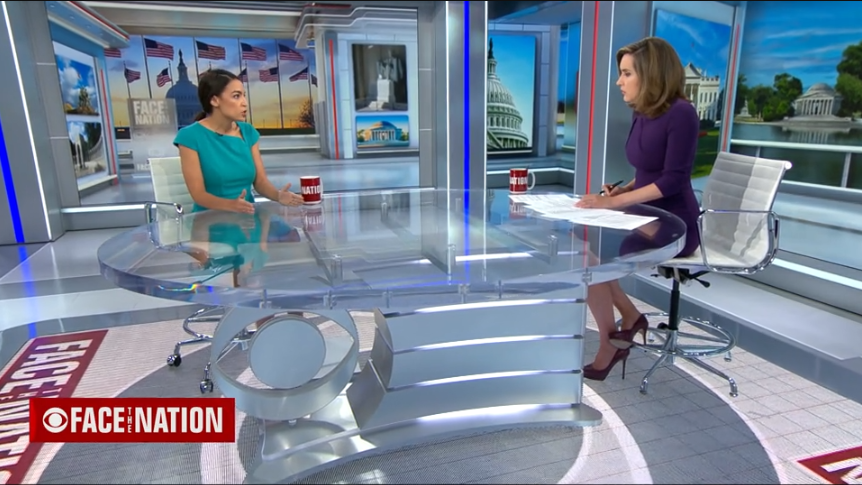 CBS‘s Margaret Brennan (Face the Nation, 10/3/21) to Rep. Alexandria Ocasio-Cortez: “Moderates…would say you’re not playing for the team when you hold one bill hostage.”

While these shows neglected the question of donor influence, another narrative took its place. CNN‘s Pamela Brown (10/3/21) asked, “Are progressives willing to own it if President Biden’s agenda fails because they continue to hold the line here?” “These moderates in the House as well…would say you’re not playing for the team when you hold one bill hostage,” said Face the Nation‘s Brennan (10/3/21) to Ocasio-Cortez.

This framing makes it appear as though the progressives are primarily responsible for holding up Biden’s agenda. In fact the opposite is true. The bipartisan infrastructure bill, which contains money for roads, bridges and other basic infrastructure, is broadly supported by the public. But the reconciliation bill contains much of the meat of Biden’s agenda, including Medicare expansion, universal pre-K and free community college.

The reconciliation bill is supported by every Senate Democrat, with the exception of Manchin and Sinema. In an effort to prevent elements like the drug pricing provisions or clean energy incentives from being eliminated or reduced, House progressives have insisted on waiting to vote on the bipartisan infrastructure bill until after the reconciliation bill passes. What is crucial to understand is that the more than 90 members of the progressive caucus back both bills, while the only Democratic opposition to Biden’s two-part agenda consists of two senators and a small handful of representatives.

Still, some journalists insist that it’s the progressives who are hurting the Democratic Party. In an exchange between Sanders and ABC‘s Jonathan Karl (This Week, 10/3/21), Karl suggested that progressive holdouts could cost the Democrats governorships:

Terry McAuliffe, who, of course, is on the ballot running in Virginia, is saying that $3.5 trillion is simply too big. It’s going to hurt Democrats, and he thinks it might even hurt him in his own race in Virginia.

Much of the media have decided to take conservative opposition as a given, and treated progressive steadfastness as pointless delay. This is a manufactured narrative that could just as easily have been inverted.

The millions of viewers who watch these shows are routinely deprived of the answers that these news shows purport to dispense. To air wall-to-wall coverage of Manchin and Sinema but conceal their donor relationships is to confuse and misinform audiences.

The single greatest indicator of a politician’s vote is not branding, or the desires of constituents, but money. Reporting that doesn’t reflect this is doing a disservice.

The post TV Reports on Manchin and Sinema Leave Out Their Financial Conflicts appeared first on FAIR.

This content originally appeared on FAIR and was authored by Spencer Snyder.