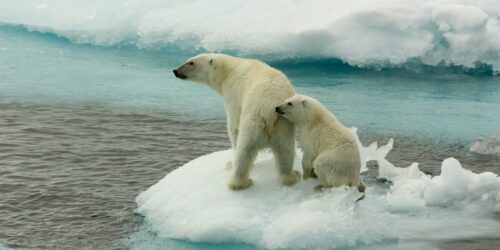 The world’s oceans in 2021 witnessed the hottest temperatures in recorded history. 1

According to the Ocean Conservancy: “From the beginning of industrialization until today, the ocean has absorbed more than 90 percent of the heat from human-caused global warming and about one-third of our carbon emissions. But we are now seeing the devastating effects of that heat and carbon dioxide.”

This brings into focus big questions about the overall condition of the ecosystems of the planet. The oceans, by far the biggest, cover more than 70% of the planet. As readily seen from outer space, the oceans are the essence of the planet.

Indeed, every ecosystem on the planet is nearly stressed to its limit and showing alarming signs of deterioration. This is factual. It’s not hard to prove. The evidence is compelling and straightforward.

Yet, that evidence shows up first where nobody lives in the least populated regions of the planet like the Arctic, Siberia, Patagonia, Antarctica, rainforests, mountain glaciers, Greenland, and, of course, the oceans.

The great cities of the world are the last to experience the loss of wildlife and to witness deterioration of ecosystems supportive of life. However, interestingly enough, rural residents throughout the world do see the radical changes in ecosystems and send messages or emails about the devastating, nearly unbelievable, loss of insects and wildlife. Their personal messages say, “it’s different now, something is missing,” a void or emptiness stares them in the face every morning.

This past year 2021 is the sixth consecutive year of increasing ocean temperatures. It’s the hottest in recorded history and a threat to marine life. In fact, it’s already impacting marine life, as increasing numbers of emaciated birds, whales, and fish wash ashore. Who will take notice of this tragedy and do something with enough international impact that it truly makes a difference?  That important question is searching for answers.

A team of journalists from the LA Times traveled to the Far North only recently. Here’s what they reported:

Forces profound and alarming are reshaping the upper reaches of the North Pacific and Arctic oceans, breaking the food chain that supports billions of creatures and one of the world’s most important fisheries.2

People do not cherish articles like this, or the referenced LA Times article or any article that deals with loss of wildlife and loss of habitat and loss of ecosystems. The negativity is too much to handle on a personal basis. Nevertheless, if reality is not recognized for what it really truly is, then nobody will ever strive to change things for the better.

For some time now scientists have been beating the drums about the risks of loss of ocean life. Now, their warnings have turned real. Alas, scientists’ warnings have not stopped the ravaging of CO2 emissions, heat, plastic, pollution, agricultural runoff, overfishing, or garbage.

It is important to contemplate the possibility that the human footprint is altering ocean life so much so that it risks not only the world’s fisheries, it risks loss of all marine life. In fact, at the current rate, scientists believe ocean life will be gone by mid century. It can already be seen right before our eyes.

An article by the Natural History Museum/London claims: “Nature is stretching to a breaking point. If we don’t stop, the ocean could be drastically changed within our lifetimes.”

One year ago the Alliance of World Scientists, 13,700 members, delivered a biting report, not mincing words: “Scientists now find that catastrophic climate change could render a significant portion of the Earth uninhabitable.” 3

According to Janet Duffy-Anderson, who is a marine scientist, interviewed by the LA Times team, and the leader of surveys of the Bering Sea for the National Oceanic and Atmospheric Administration’s Alaska Fisheries Science Center: The ripple effect of what’s happening in the Far North could shut down fisheries as well as leave migrating animals starving for food, which, in fact, is already omnipresent. For the third year in a row, Gray Whales have been found in very poor condition or dead in large numbers along the west coast of Mexico, USA and Canada.

Since 2019 hundreds of Gray Whales have died along North America’s Pacific coastline. Many of the whales appeared skinny or underfed. 4

Even though protected under the Marine Mammal Protection Act, the Gray Whale is on the International Union for Conservation of Nature (“IUCN”) Red List of Threatened Species.

Starving whales at the top of the food chain can only mean the ocean is sickly. Too much heat and overfishing and discarded fishing nets (4,600,000 commercial fishing vessels either legally or illegally prowl the seas. (See the Netflix documentary: Seaspiracy) and too much CO2 combined with pollution cause a multitude of deadly problems for marine life.

It’s estimated that one billion sea creatures died off the coast of Vancouver, as extreme heat hit the Pacific.  5

Recent studies of the Pacific Ocean inflow to the Arctic from 1990-2019 registered significant annual mean temperature warming of plus 2°C to 4°C It’s believed that 4°C above pre-industrial for the planet as a whole is a killer for terrestrial life. 6

Moreover, according to scientists interviewed by the LA Times team: “Data from a Bering Sea mooring shows the average temperature throughout the water column has risen markedly in the last several years: in 2018, water temperatures were 9F degrees above the historical average.”

Not surprisingly, people do not want to accept the facts about how bad things really are, but it is becoming only too apparent that to maintain life on the planet, the world economy must stabilize with massive reduction of greenhouse gases accompanied by flat-line economic activity. It is not difficult to make that case with plenty of evidence readily available.

Changing, mitigating, even moderating the world’s massive economic growth trend is as big of a problem as it creates for the planet’s ecosystems because of the carelessness of the growth machine. Economic growth and the condition of the planet work inversely, and, of course, the planet loses. Why is that? Answer: According to the Global Human Footprint Network (14,000 data points), humanity is using 1.75 Earth’s whilst “failing to husband its resources.” That’s an on-going formula for disaster.

What has already happened is hard to accept: “Today’s seas contain only 10% of the marlin, tuna, sharks and other large predators that were found in the 1950s.” 7

How about the next seventy?

The post The Oceans Are Overheating first appeared on Dissident Voice.