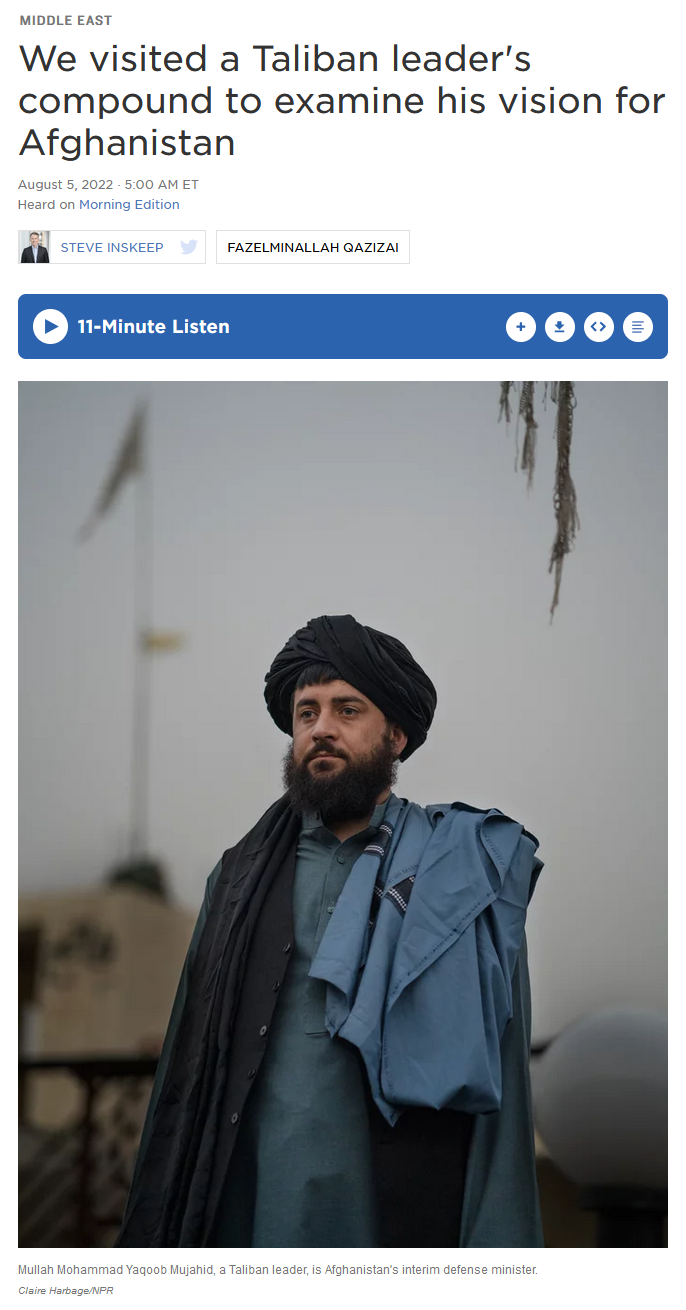 In the first part of a series of reports on Afghanistan, NPR host Steve Inskeep (Morning Edition, 8/5/22) interviewed current Afghan Defense Minister Mohammad Yaqoob Mujahid. In introducing Yaqoob on air, Inskeep referenced Yaqoob’s father, the former head of the Taliban, Mullah Muhammad Omar: “He was the leader who refused to turn over Osama bin Laden in 2001, a refusal that led to the US attack.”

In the online version of the article, NPR wrote: “Omar also sheltered Osama bin Laden, and refused to turn over the Al Qaeda leader when the United States demanded him after 9/11.”

This line that the Taliban “refused to turn over Osama bin Laden,” and that this “led to the US attack,” though part of the commonly accepted chronology of the war, is a gross distortion of history. The truth is almost the exact opposite: The Taliban repeatedly offered to give up Bin Laden, only rejecting George W. Bush’s demands for immediate and unconditional acquiescence without discussion.

‘There are no negotiations’

The series of events leading up to the US Afghanistan invasion were laid out recently in a Current Affairs essay by Nathan Robinson and Noam Chomsky (8/3/22), titled “What Do We Owe Afghanistan?”

Even before 9/11, the Taliban—who already had a “deeply contentious” relationship with Al Qaeda—repeatedly signaled their willingness to work with the US in bringing Bin Laden to justice. Former Taliban Foreign Minister Wakil Ahmad Muttawakil told Al Jazeera (9/11/11) that for years, they had used unofficial channels to present ways to  “resolve the Osama issue.” “One such proposal,” Muttawakil said, “was to set up a three-nation court, or something under the supervision of the Organization of the Islamic Conference [OIC].”

Robert Grenier, former CIA station chief in Pakistan, confirmed US receipt of these proposals to Al Jazeera, but dismissed them as a “ploy” to be ignored. According to Grenier, the US “did not trust the Taliban and their ability to conduct a proper trial.”

In the wake of the 9/11 attacks, the US demanded that the Taliban immediately hand over Bin Laden. The Taliban responded by offering to put Bin Laden on trial if they were shown evidence of his involvement in the attacks. The US refused to share proof, rejecting any diplomatic option.

Bush announced, “There are no negotiations,” then proceeded to bomb Afghanistan, despite numerous warnings from both humanitarian organizations and anti-Taliban forces in the country that their actions would only hurt the Afghanistani people. Even after the bombs began to fall, the Taliban repeated their offers to give up Bin Laden—even dropping the requirement for actual evidence. The US continued its onslaught, initiating the 20-year odyssey of occupation that unraveled last year.

‘Preponderance on the Eurasian continent’

Zbigniew Brzezinski’s vision of the “Grand Chessboard” included a prospective pipeline across Afghanistan.

It’s abundantly clear that US aims in the country transcended capturing Bin Laden and obtaining justice for 9/11 victims. Some, like Chomsky and Robinson, attributed the hasty invasion to Bush’s personal bloodlust.

Others trace US policy in Afghanistan to longstanding geopolitical imperatives for military influence and control of the world’s natural resources. Former National Security Advisor Zbigniew Brzezinski, architect of the “Afghan Trap,” wrote in his 1997 book The Grand Chessboard that “America’s global primacy is directly dependent on how long and how effectively its preponderance on the Eurasian continent is sustained.” The book even contained a map of a proposed pipeline through Afghanistan.

The Bush administration’s ranks were pulled in large part from the neoconservative think tank, the Project for a New American Century. In PNAC’s now infamous 2000 document, Rebuilding America’s Defenses, the overtly imperial organization called for the establishment of “forward-facing bases” in Central Asia, calling these “an essential element in US security strategy given the longstanding American interests in the region.”

Of PNAC’s 25 founding members, ten went on to staff the Bush administration, including Vice President Dick Cheney, Defense Secretary Donald Rumsfeld and Deputy Defense Secretary Paul Wolfowitz. The day before 9/11, the Bush administration had already made a decision to eventually attack Afghanistan, using Bin Laden as a pretext.  On September 12, Rumsfeld and Wolfowitz were trying to initiate a wider war by attacking Iraq, despite nothing linking Iraq to the attacks. 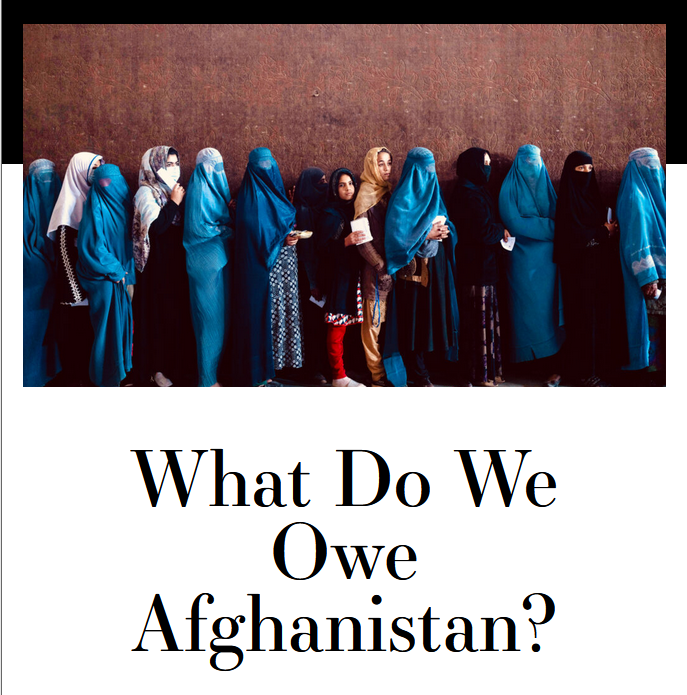 Nathan Robinson and Noam Chomsky (Current Affairs, 8/3/22) : “Long before 9/11, the Taliban had reached out to the United States and offered to put Bin Laden on trial under the supervision of a ‘neutral international organization.'”

Whatever the Bush administration’s motivations, it’s clear that the reality is a far cry from NPR’s propagandistically simple formulation that the Taliban simply refused to hand over Bin Laden, and this is what led to the US attack on Afghanistan.

However, it should be noted that even in Inskeep’s version of events, the US invasion would still be an unlawful and unnecessary act of aggression. As Chomsky and Robinson wrote in Current Affairs (8/3/22):

The 9/11 attacks could have been dealt with as a crime. This would have been sane and consistent with precedent. When lawbreaking occurs, we seek the perpetrators, rather than starting wars with unrelated parties.…

If the Bush administration had wanted to “defend Americans from another terrorist attack,” it would have pursued the criminal network responsible for the original attack. Instead, it wanted vengeance, and launched an illegal war that killed thousands of innocent people.

NPR’s historical framing is an attempt to paint the Taliban as prepared to defend Bin Laden to the death, and thus complicit or supportive of the 9/11 attacks. This inaccurate portrayal serves to retroactively justify the US assault on one of the poorest countries in the world.

Despite Biden withdrawing from Afghanistan after a brutal 20-year occupation, the US continues to attack the population today. Earlier this year, the Biden administration directly invoked the horrors of 9/11 to justify robbing the Afghans of $7 billion in central bank reserves.  In some twisted form of justice, the Biden administration decided to keep the stolen funds and distribute half of it to families of 9/11 victims.

The other half was to be redistributed to Afghanistan in the form of humanitarian aid, though experts warn that this is far from a substitute for restarting the economy.  This despite outrage from several 9/11 families over the violence committed in their name. As the Afghan economy collapses, nearly the entire country is being plunged into misery on a mass scale, and the US is intent on making it worse (FAIR.org, 2/15/22).

In future reporting,  NPR should present a clearer picture of historical events to provide proper context for their listeners, and to avoid legitimizing the ongoing, massively destructive policies of the United States by promoting official state mythology.

ACTION ALERT: You can send a message to NPR‘s public editor here (or via Twitter: @NPRpubliceditor). Please remember that respectful communication is the most effective. Feel free to leave a copy of your message in the comments thread of this post.

The post NPR Distorts History of US Invasion of Afghanistan appeared first on FAIR.

This content originally appeared on FAIR and was authored by Bryce Greene.