Forget about the fact these Pharma Felons have a long rap sheet going way back on the injuries and deaths created by their so-called approved products. They can’t even get vials of their bioweapon off the assembly line without metal bits in millions of batches.

That’s Pfizer and the billionaire CEO, the Greek Jewish, boosted up twice after mRNA double jab, who is now hot with SARS-CoV2, and he is happy to have the oral drug his company produced. What to believe?

Pfizer and vaccine maker Moderna, which also makes a two-shot mRNA vaccine, are updating their drug formulas to provide protection against newer versions of the virus as part of a fall booster campaign.

Paxlovid, a pill that is available by prescription after infection, helps patients avoid serious illness when it is administered shortly after the onset of symptoms.

I got the SARS-CoV2 a week ago, maybe from Trader Joe’s up in Corvallis. Nah, a summer flu? Nah, not acting like a natural pathogen in me. I have had malaria, dengue fever, a truck load of gut diseases, and slew of bug and jellyfish stings and bites. This bug does things that are not natural. Tied to HIV? Some see that it is a venom-like hit to the body.

I have heard person after person — young athletic people — tell me about being double vaxxed and getting SARS-CoV2 for nine days or two weeks, with pneumonia. And then, getting hit twice or three times with the bioweapon. I am talking about a surfer who is also an arborist — thin, super fit, and active.

And, we are not to talk about these stories, not put them out there on Facebook or Twitter, not supposed to talk about the patterns, anecdotal evidence which IS valid. RJK Jr.’s Children’s Health Defense now has been deplatformed from Facebook and Twitter, so we know more and more information gathering by us, the people, will be scrubbed.

Kennedy’s Facebook page, with more than 300,000 followers, was still active at the time of publication. The company spokesperson said there were no plans to take down that page “at this time.”

In a statement Thursday, provided by Children’s Health Defense, the nonprofit group that he chairs, Kennedy pushed back at the assertion that his posts were false and accused Facebook of “censorship.”

Lois Gibbs of Love Canal fame would have been deplatformed in today’s messed up censorious world:

Love Canal is an aborted canal project branching off of the Niagara River about four miles south of Niagara Falls.  It is also the name of a fifteen-acre, working-class neighborhood of around 800 single-family homes built directly adjacent to the canal.  From 1942 to 1953, the Hooker Chemical Company, with government sanction, began using the partially dug canal as a chemical waste dump.  At the end of this period, the contents of the canal consisted of around 21,000 tons of toxic chemicals, including at least twelve that are known carcinogens (halogenated organics, chlorobenzenes, and dioxin among them).  Hooker capped the 16-acre hazardous waste landfill in clay and sold the land to the Niagara Falls School Board, attempting to absolve itself of any future liability by including a warning in the property deed.

Public awareness of the disaster unfolded in the late 1970s when investigative newspaper coverage and grassroots door-to-door health surveys began to reveal a series of inexplicable illnesses—epilepsy, asthma, migraines, and nephrosis—and abnormally high rates of birth defects and miscarriages in the Love Canal neighborhood.  As it turns out, consecutive wet winters in the late 1970s raised the water table and caused the chemicals to leach (via underground swales and a sewer system that drained into nearby creeks) into the basements and yards of neighborhood residents, as well as into the playground of the elementary school built directly over the canal.  After a series of frustrating encounters with apathetic NYS officials, who were slow to act but quick to dismiss the activists (most of whom were working-class women who lived in the neighborhood) as a collection of hysterical housewives, President Jimmy Carter declared a state of emergency in 1978 and had the federal government relocate 239 families.  This left 700 families who federal officials viewed as being at insufficient risk to warrant relocation, even though tests conducted by the NYS Department of Health revealed that toxic substances were leaching into their homes.  After another hard battle, activists forced Carter to declare a second state of emergency in 1981, during which the remaining families were relocated.  The total cost for relocation of all the families was $17 million. (source)

Then, how can any group of activists like RFK Jr.’s CHD coalesce in this messed up Google-Facebook-Twitter-Instagram world. What a bioweapon, no? SARS-CoV2!

Michael Carroll’s Lab 257 also documents a Nazi connection to the original establishment of a U.S. laboratory on Plum Island. According to the book, Erich Traub, a scientist who worked for the Third Reich doing biological warfare, was the force behind its founding.

The mission was to develop biological warfare to be directed against animals in the Soviet Union. This included infecting cattle and reindeer with foot-and-mouth disease.

“Ironically, Traub spent the prewar period of his scientific career on a fellowship at the Rockefeller Institute in Princeton, New Jersey, perfecting his skills in viruses and bacteria under the tutelage of American experts before returning to Nazi Germany on the eve of war,” says “Lab 257.”  While in the U.S. in the 1930s, too, relates the book, Traub was a member of the Amerika-Deutscher Volksbund which was involved in pro-Nazi rallies held weekly in Yaphank on Long Island.

With the end of the war, Traub came back to the United States under Project Paperclip, a U.S. program under which Nazi scientists, such as Wernher von Braun, were brought to America.

“Traub’s detailed explanation of the secret operation on Insel Riems” given to officials at Fort Detrick in Maryland, the Army’s biological warfare headquarters, and to the CIA, “laid the groundwater for Fort Detrick’s offshore germ warfare animal disease lab on Plum Island,” says “Lab 257.” “Traub was a founding father.” And Plum Island’s purpose, says the book, became what Insel Riems had been: to develop biological warfare to be directed against animals in the Soviet Union­ now that the Cold War and conflict between the U.S. and the Soviet Union had begun.

The Long Island daily newspaper Newsday earlier documented this biological warfare mission of Plum Island. In a lead story on November 21, 1993, Newsday investigative reporter John McDonald wrote: “A 1950s military plan to cripple the Soviet economy by killing horses, cattle and swine called for making biological warfare weapons out of exotic animal diseases at a Plum Island laboratory, now-declassified Army records reveal.” A facsimile of one of the records, dated 1951, covered the front page of that issue of Newsday. (source)

Oh, the nefarious work of former Nazi’s, and Lyme DIsease now! Pfizer working on that vaccine.

And we trust this multibillionaire, Chairman and CEO Albert Bourla: Pfizer has been a “habitual offender,” persistently engaging in illegal and corrupt marketing practices, bribing physicians and suppressing adverse trial results. Since 2002 the company and its subsidiaries have been assessed $3 billion in criminal convictions, civil penalties and jury awards.

I have a CPA in Tucson, from my mom’s days, and she wondered what my gmail signature block image was about:

I was asked to send her sources, since she is stuck in Mainstream Stenographer Media, and I asked her if she has Ukraine roots, and she said her husband’s family did. Both are Jewish.

Ukraine & The Specter of Bioterror with Robbie Martin And Gumby  Unlimited Hangout with Whitney Webb
Scott Ritter analyzes the situation at the nuclear power plant, Russia’s non-response, the situation on the ground, and Ukraine attacks Crimea. And a prediction on how all this will end. Here.

I am not sure how much bandwidth she has for this stuff, but I warned her that if she really went through some of these sources, she will come out the other end depressed, ashamed, maybe. But who knows. I have daily people with TDS, Trump Derangement Syndrome, and they have no grounding on anything that ties both the country’s manure pile parties into war, finance, lies, scams, hatred of the people. Here, a bunch of other sources from me to the CPA, Stephen Cohen, RIP.

Other sources sent to her:

“Is the West finally realizing that Russia will win the war in Ukraine?”

This article is the fourth in a series of articles I have written covering the US proxy war against Russia in Ukraine.  While this civil war in Ukraine actually began 8 years ago in 2014, the Western media narrative has portrayed this conflict as an unprovoked invasion by Russia that began on February 24, 2022.  The 8 year civil war in the Donbass Region is a direct result of the US backed coup and color revolution known as the Maidan Revolution, that ousted the democratically elected President Viktor Yanukovych and installed an ultra-nationalist, anti-Russian, Nazi government.

The article goes on to explain that the majority of ethnic Russians in east and south Ukraine rejected the coup government. Crimea also voted to secede and was annexed into Russia.  Then, unreported in MSM, Donetsk and Lugansk became breakaway provinces thus leaving Ukraine, but were soon invaded by Ukrainian Nazis who refused to give up the region.  Western media rarely acknowledged the huge civilian death toll in eastern Ukraine. Then, Minsk Agreement accepted and afterwards not followed.

Following that, last year the Biden Administration sent more weapons and gave special forces training to Ukrainian Nazi paramilitaries.  With those proxy events, in April 2021, Zelensky said he was not going to honor the Minsk 2 Agreement and was planning to retake the breakaway regions and Crimea by force.  The US created this war by preparing Ukrainian forces for the invasion.

Did Russia underestimate how fiercely the Ukrainians would fight?  Perhaps so.  Did they make mistakes and lose soldiers and generals?  Absolutely.  Are they losing on the battlefield?  Absolutely not and this is becoming more apparent to Western media that hasn’t wanted to outright admit it.  It has downplayed the fact that Russia has taken much territory including Mariupol, Kherson and now 95% of Lugansk has been liberated from Ukrainian control. Western media outlets, such as Bloomberg News, are finally acknowledging the Russian victories in this region of the Donbass and that Ukrainian troops are now at risk of encirclement by Russian forces.

I continue to help people read beyond the propaganda lines deployed by the Nulands and Kagans and Zeleskys of the world.

What is worthy of praise is the pushback by independent journalists and media outlets against the lies reported daily in the New York Times, Washington Post, CNN, the Wall Street Journal, The Guardian, the BBC, NPR, etc.  The well researched information coming from independent media and journalists, such as The Grayzone, Consortium News, The World Socialist Website, The Dive with Jackson Hinkle, Scott Ritter, Regis Tremblay shines a bright light on what the establishment media is distorting and ignoring.  War reporters, Patrick Lancaster (USA), Eva K. Bartlett (Canada), Alejandro Kirk (HispanTV – Latin America) have exposed the Western media lies that Russia is responsible for the carnage and that civilians support Ukraine’s military.  All Ukrainian civilians interviewed blame Ukraine for the deaths, injuries and destruction.  Russians often bring in food and humanitarian aid.

But then there is Vogue: And the beat goes on and on. 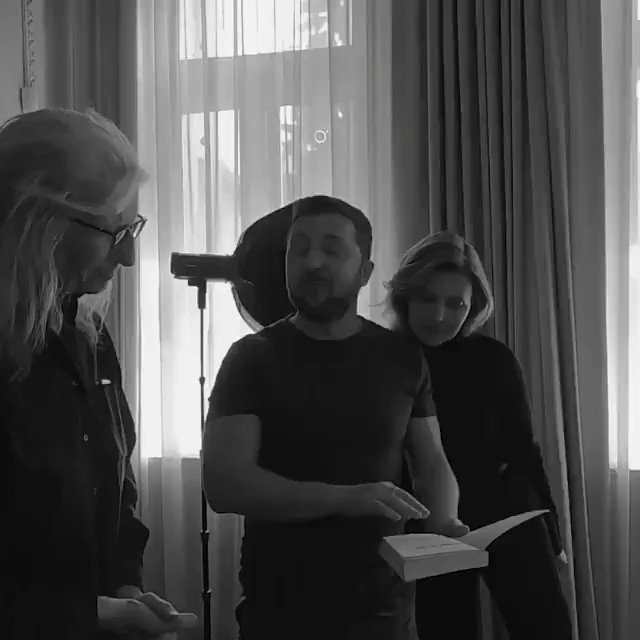 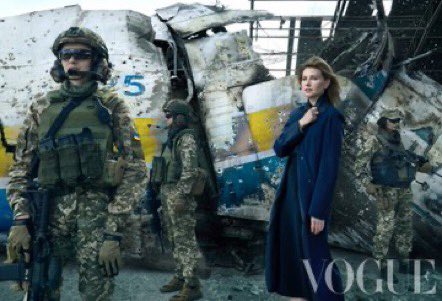 The post Tens of Millions of Vials of Bioweapons on the Wall . . . Or Zelenksy’s Labs! first appeared on Dissident Voice.