Regardless of the outcome of the latest Israeli elections, Arab parties will not reap meaningful political benefits, even if they collectively achieve their highest representation ever. The reason is not about the parties themselves, but in Israel’s skewed political system which is predicated on racism and marginalization of non-Jews.

Israel was established on a problematic premise of being a homeland of all Jews, everywhere – not of Palestine’s own native inhabitants – and on a bloody foundation, that of the Nakba and the destruction of historic Palestine and the expulsion of its people.

Such beginnings were hardly conducive to the establishment of a real democracy, perfect or blemished. Not only did Israel’s discriminatory attitude persist throughout the years, it actually worsened, especially as the Palestinian Arab population rose disproportionally compared to the Jewish population between the Jordan River and the Mediterranean Sea.

The unfortunate reality is that some Arab parties have participated in Israeli elections since 1949, some independently and others under the ruling Mapei party umbrella. They did so despite Arab communities in Israel being ruled by a military government (1951-1966) and practically governed, until this day, by the unlawful ‘Defense (Emergency Regulations)’. This participation has constantly been touted by Israel and its supporters as proof of the state’s democratic nature.

This claim alone has served as the backbone of Israeli hasbara throughout the decades. Though often unwittingly, Arab political parties in Israel have provided the fodder for such propaganda, making it difficult for Palestinians to argue that the Israeli political system is fundamentally flawed and racist.

Palestinian citizens have always debated among themselves about the pros and cons of taking part in Israeli elections. Some understood that their participation validates the Zionist ideology and Israeli apartheid, while others argued that refraining from participating in the political process denies Palestinians the opportunity to change the system from within.

The latter argument has lost much of its merit, as Israel sank deeper into apartheid, while social, political and legal conditions for Palestinians worsened. The Legal Center for Arab Minority Rights in Israel (Adalah) reports on dozens of discriminatory laws in Israel that exclusively target Arab communities. Additionally, in a report published in February, Amnesty International describes thoroughly how the “representation of Palestinian citizens of Israel in the decision making process … has been restricted and undermined by an array of Israeli laws and policies.”

This reality has existed for decades, long before July 19, 2018, when the Israeli parliament approved the so-called Jewish Nation-State Basic Law. The Law was the most glaring example of political and legal racism, which made Israel a full-fledged apartheid regime.

The Law was also the most articulate proclamation of Jewish supremacy over Palestinians in all aspects of life, including the right to self-determination.

Those who have argued that Arab participation in Israeli politics served a purpose in the past should have done more than collectively denounce the Nation-State law, by resigning en masse, effective immediately. They should have taken advantage of the international uproar to convert their struggle from a parliamentary to a popular grassroots one.

Alas, they have not. They continued to participate in Israeli elections, arguing that if they achieved greater representation in the Israeli Knesset, they should be able to challenge the tsunami of Israeli discriminatory laws.

This did not happen, even after the Joint List, which unified four Arab parties in the March 2020 elections, achieved its greatest turnout ever, becoming the Knesset’s third largest political bloc.

The supposed historic victory culminated to nil because all mainstream Jewish parties, regardless of their ideological backgrounds, refused to include Arab parties in their potential coalitions.

The enthusiasm that mobilized Arab voters behind the Joint List began to dwindle, and the List itself fragmented, thanks to Mansour Abbas, the head of the Arab party, Ra’am.

In the March 2021 elections, Abbas wanted to change the dynamics of Arab politics in Israel altogether. “We focus on the issues and problems of the Arab citizens of Israel within the Green Line,” Abbas told TIME magazine in June 2021, adding “we want to heal our own problems”, as if declaring a historic delink from the rest of the Palestinian struggle.

Abbas was wrong, as Israel perceives him, his followers, the Joint List and all Palestinians to be obstacles in its efforts to maintain the exclusivist ‘Jewish identity’ of the state. The Abbas experiment, however, became even more interesting, when Ra’am won 4 seats and joined a government coalition led by far-right, anti-Palestinian politician Naftali Bennet.

By the time the coalition collapsed in June, Abbas achieved little, aside from splitting the Arab vote and proving, again, that changing Israeli politics from within has always been a fantasy.

Even after all of this, Arab parties in Israel still insisted on participating in a political system that, despite its numerous contradictions, agreed on one thing: Palestinians are, and will always be, the enemy.

Even the violent events of May 2021, where Palestinians found themselves fighting on multiple fronts – against the Israeli army, police, intelligence services, armed settlers and even ordinary citizens – did not seem to change the Arab politicians’ mindset. Arab population centers in Umm Al-Fahm, Lydda and Jaffa, were attacked with the same racist mentality as Gaza and Sheikh Jarrah, illustrating that nearly 75 years of supposed integration between Jews and Arabs under Israel’s political system hardly changed the racist view towards Palestinians.

Instead of converting the energy of what Palestinians dubbed the ‘Unity Intifada’ to invest in Palestinian unity, Arab Israeli politicians returned to the Israeli Knesset, as if they still had hope in salvaging Israel’s inherently corrupt political system.

The self-delusion continues. On September 29, Israel’s Central Election Committee disqualified an Arab party, Balad, from running in the November elections. The decision was eventually overturned by the country’s Supreme Court, urging an Arab legal organization in Israel to describe the decision as ‘historic’. In essence, they suggested that Israel’s apartheid system still carries the hope of true democracy.

The future of Arab politics in Israel will remain grim if Arab politicians continue to pursue this failed tactic. Though Palestinian citizens of Israel are socio-economically privileged if compared to Palestinians in the Occupied Territories, they enjoy nominal or no substantive political or legal rights. By remaining loyal participants in Israel’s democracy charade, these politicians continue to validate the Israeli establishment, thus harming, not only Palestinian communities in Israel but, in fact, Palestinians everywhere. 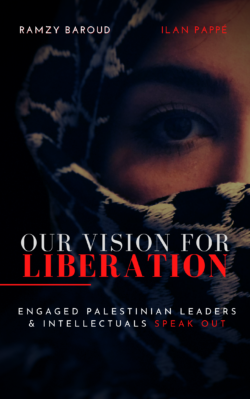