This year marks the seventieth anniversary of the theologian Paul Tillich’s famous book, The Courage to Be.  Widely read in the days when an educated public read books, it is long forgotten.  In it, Tillich surveys the history of anxiety and fear and their relation to courage, religious faith, and the meaning of life.  His closing sentence – “The courage to be is rooted in the God who appears when God has disappeared in the anxiety of doubt” – became acclaimed as an astute description of the existential need to find a foundation for faith and courage when their foundations were shaking.

His writing profoundly influenced many, even when they didn’t wholly agree with him.  This included Dr. Martin Luther King, Jr., who, commenting on Tillich’s death in 1965, said, “His Christian existentialism gave us a system of meaning and purpose for our lives in an age when war and doubt seriously threatened all that we had come to hold dear.”

I mention The Courage to Be not to engage in a recondite theological and philosophical analysis, which is the last thing we now need, but to contrast his call for spiritual courage with what we have been experiencing pouring forth from the mass corporate media for years  There is a drumbeat of fear-mongering so intense and constant that it is almost comical if it weren’t so effective in reducing people to quaking, frightened children.

Primarily about Covid and the need to obey the authorities and submit to being jabbed with mRNA Covid “Vaccines” – the idolatrous religion of bio-security – this  religion of fear goes much further and much deeper.  Scenarios of fear have been rehearsed and produced for decades by the intelligence/IT/media giants on a multitude of issues, large and small.  They are rooted in a spiritually nihilistic political propaganda campaign that is exponentially increasing fear, anxiety, and despondency on a vast scale, which is its intent.  Fearful people are easily cowered and controlled.  The elites know that regular people throughout the world are fed up with being subjected to violence and abuse in multiple forms, and if courage triumphs over their fears, they might join in worldwide solidarity and revolt, as they have been doing in various places recently. To prevent this, the authorities must use terror tactics to divide and conquer them. If people dare to rise up and even question the propaganda, they have been and will be called terrorists for doing so.  Dissent is now equated with terrorism and thus it must be censored.

All this fear-mongering draws on people’s normal fears of “not to be,” meaning dead. It is, of course, understandable not wanting to be dead, but living in constant fear is a living death.  Tillich, who suffered deep trauma as a chaplain in the trenches of WW I and was later dismissed from his teaching position in Germany when Hitler came to power, wrote that courage is rooted in the spiritual acceptance that underlying our individual lives is the power of Being, by which he meant God, and that fear and anxiety about our fates can be confronted only through the courage to accept in faith this foundational reality.

I think it is self-evident to anyone who glances at the mainstream media that fear is their staple.  In just the last week or so, I have seen The New York Times, an official organ of propaganda if there ever were one but known historically as the Grey Lady for understatement, tell its readers in a hyperventilating style that anxiety about climate change has spawned a growing field of therapeutic treatment for sufferers, how deer in your back yard are infected with Omicron, how the Russians are coming, etc.  This is the typical fear promoting propaganda that headlines all the media sites every day and has been doing so for years.  Any casual observer can list them on a daily basis, from major to minor matters to fear.

Yet despite this constant, blatant propaganda, governments flip the truth and warn that anyone who questions this are conspiracy theorists intent on causing trouble and therefore must be watched and refuted. Just the other day the U.S. Department of Homeland Security issued a “Summary of Terrorism Threat to the U.S. Homeland,” saying:

The United States remains in a heightened threat environment fueled by several factors, including an online environment filled with false or misleading narratives and conspiracy theories, and other forms of mis- dis- and mal-information (MDM) introduced and/or amplified by foreign and domestic threat actors.

After twenty years of such obvious propaganda, you would think these people would be embarrassed, but they obviously are not and intend to propagate this bullshit for years to come.  They and their media accomplices have taken their lingo lessons straight from Nineteen Eighty-Four.

On the bio-security religious front alone, Kit Knightly of Off-Guardian has recently reported that the authorities have warned us that there is a vast underdiagnosis of heart disease that may stealthily be coming to get us (not from “vaccines,” of course) and that HIV testing and vaccines look to be the next big push, for there is now the claim that a new variant of HIV is spreading in Europe.  President Biden declared in December 2021 that his administration was aiming to “end the HIV/Aids epidemic by 2030.”  While Covid restrictions may be easing, the mRNA “vaccine push” is not, and their promoters will only find different germs to defeat with “vaccines” and tests to ease the fears of the propagandized public, so many of whom have been turned into hypochondriacs.

The promulgation of the fear of germs and disease and foreign and domestic “threat actors” is permanent.  For anyone naively thinking that there will be an easing of this elite war of lies, I would suggest they rethink that assumption.  The state of siege that is the Covid crisis will be followed by many more, and this germ warfare includes a vast array of foreign variants, led by Russia and China.  We are in a permanent crisis and emergency engineered by the ruling classes to maintain their control.

This elite war against regular people has no end in sight.  The elites know that people get worn down over time and lose hope; thus, they plan for the long haul and keep hammering away.  Paul Tillich’s book is important because of its stress on the need for courage in the face of the fear-mongering.  Without a spiritual foundation to sustain one for the long haul, depression will lead to despair or surrender.  History should teach us this. The evil ones often win, at least in the short run, and each of us doesn’t have a long run.  Our time is brief.

The great dissenters and rebels of the past, even when not overtly religious, kept faith with their comrades and causes because they felt a deep, unbreakable, invincible connection.  It is called different names or none at all.  Maybe faith is the best word.  Faith in what?  Some call it God, as I do. Words can’t explain it; I feel it. Others say nothing and just carry on, sustained by the invisible. Some call it faith in human solidarity.  The names don’t matter.  It is not about naming but experiencing. The poet D.H. Lawrence said wisely that we are transmitters of life, “and when we fail to transmit life, life fails to flow through us.”  And he added in his inimitable style: “It is a fearful thing to fall into the hands of the living God.  But it is a much more fearful thing to fall out of them.”  It is not easy, but fear helps us fall out.

There were those who called Tillich an atheist because his philosophical explanation sounded too abstruse, which is true.  But he made a fundamental point about how as human beings we participate in Being, which is the ground of our existence.  We are part of something that is far larger than our puny selves –  beings in the sea of Being.  Who can deny that?  His call to courage hit a resonant cord with believers, agnostics, and atheists alike.  Not a poet but a German trained immigrant scholar who emigrated to the U.S.A., his language was steeped in heavy philosophical verbiage, yet it found a wide audience in its analysis of fear, anxiety, and especially courage because it was about fundamental truths.  Courage is fundamental, as is faith.

I talk always to the man who walks along with me;
– men who talk to themselves hope to talk to God
Someday –
My soliloquies amount to discussions with this friend,
Who taught me the secret of loving human beings.
….
And when the day arrives for the last leaving of all,
And the ship that never returns to port is ready to go,
You’ll find me on board, light, with few belongings,
Almost naked like the children of the sea.

We are children of the sea and courage keeps us afloat.

Humor also helps, for we are funny creatures.

It is not often that one escapes an unintended assassination attempt.  I am glad to say that I have.

This is an example of the power of fear. Where I live, the winter has been quite cold and there was a recent ice storm with thick ice everywhere on top of snow.  My wife was fearful of falling and so had bought hiking poles for herself and me as Christmas gifts.  I said I didn’t want them and wouldn’t use them; that I wasn’t afraid, that I had faith in my ability to sustain myself.  So I didn’t use them, which angered her.  One day when the ice in the driveway and on the car was inches thick, she cajoled me into using the sticks to reach the car.  She set them for me with their clips at the proper height, since they are adjustable.  We toddled down the pathway to the car, setting one pole out ahead of the other in turn.  I exaggerated my need for them, bending far over as if I were in great need of the crutches.  Approaching the driveway, I extended my right hand pole out in front and it collapsed because the clips weren’t set tight and I went flying face forward onto the ice.  She looked at me in fear, not sure if I was dead or hurt or if her fear had made her into an accidental assassin.  She needn’t worry.  It was funny.

We all fall eventually, but in the meantime, worrying about it is self-defeating.  It is a reaction to fear.  Worrying is a form of preying on oneself (etymology: to seize by the throat with one’s teeth and kill), and it can be induced – and is – by the campaigns of fear that we are being subjected to.

The courage to be was Tillich’s way of saying that we are upheld by far more than we know.  Call it Being, Tao, the Great Spirit, or God.  Courage is contagious and will carry us on.  It is what we need to resist the fear-mongers who are at our throats. 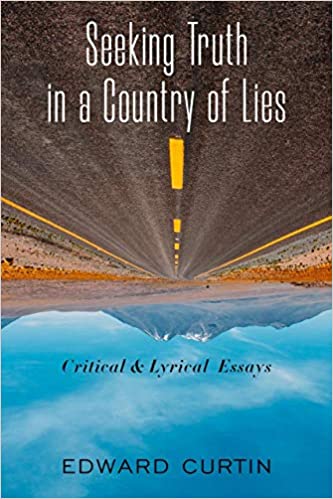 The post The Fear Not to Be first appeared on Dissident Voice.

This content originally appeared on Dissident Voice and was authored by Edward Curtin.