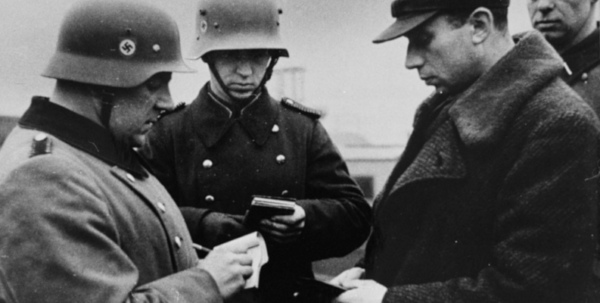 On 1 September, 1941, Chief of Reich Security Reinhard Heydrich, one of the most fanatical, mass-murdering Nazis, issued a now notorious decree ordering Jews above the age of six to wear an identifying badge in public. The Jewish Badge, a yellow Star of David with the word “Jew” inscribed inside the star, was meant to stigmatize and humiliate the Jews and was also used to segregate them and monitor and control their movements.

Nothing like that is happening currently, especially not in New Normal Germany.

What is happening currently in New Normal Germany is the fascist fanatics in control of the government are rewriting the “Infection Protection Act,” again — as they have been doing repeatedly for the last two years — in order to allow themselves to continue to violate the German constitution (the “Grundgesetz“) and rule the nation by arbitrary decree under the guise of “protecting the public health.”

This repeatedly revised “Infection Protection Act” — which has granted the government of New Normal Germany the authority to order lockdowns, curfews, the outlawing of protests against the New Normal, the mandatory wearing of medical-looking masks, the segregation and persecution of “the Unvaccinated“, etc. — is, of course. in no way remotely comparable to the “Enabling Act of 1933,” which granted the government of Nazi Germany the authority to issue whatever decrees it wanted under the guise of “remedying the distress of the people.”

There is absolutely no similarity whatsoever between these two pieces of legislation.

I mean, look at this “Autumn/Winter Plan” for the new revision of the “Infection Protection Act,” which will remain in effect from October until Easter, and which government officials and state propagandists (a/k/a the German media) are likening to “snow chain ordinances.”

There is absolutely nothing creepily fascistic or remotely Nazi about this plan. 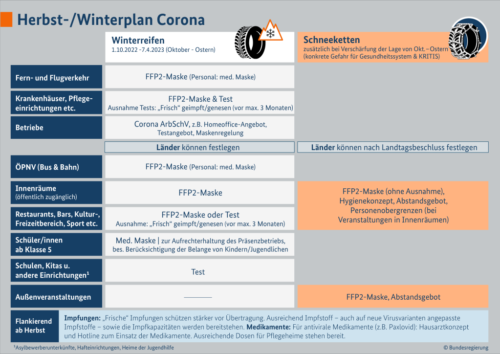 Sorry, it’s in German. Allow me to translate.

On planes and trains and at the airports and train stations, everyone will be forced to wear doggy-snout masks — i.e., FFP2 “Filtering Face Pieces” as defined by the EN 149 standard — except for the staff of the airports and train stations, and the flight attendants, conductors, etc., who will only be forced to wear “medical-looking masks.” In hospitals, clinics, doctors’ offices, nursing homes and other healthcare facilities, everyone, including the staff, will not only be forced to wear the dog-snout masks but they will also be forced to submit to testing, unless they can provide proof of “vaccination” (or recovery, which also means being tested) within the previous three-month period. On the premises of private companies; i.e., offices, factories, warehouses, and so on, the previously rescinded Arbeitsschutzverordnung (“Corona Occupational Safety Ordinance”) — masks, tests, forced “vaccinations,” “social distancing,” plastic barriers, etc. — will go back into effect in October and will remain in effect until the Easter holidays.

The individual federal states will be empowered to impose other senseless “restrictions,” like general mask mandates in shops, restaurants, and every other type of “interior spaces,” limits on the number of people who can gather publicly or in their homes, and mandatory masks for kids in schools and testing in kindergartens and daycare facilities. In restaurants, bars, theaters, museums, sports facilities, and pretty much everywhere else in society, the federal states can demand that people show proof of recent “vaccination” or recovery to be exempted from having to wear a mask.

OK, allow me to translate again.

What that last part means is that anyone who refuses to submit to repeated “vaccination” or testing will be forced to wear a mask in public to identify themselves as “Unvaccinated” (i.e., the New Normal Reich’s official “Untermenschen”).

So, OK, maybe it’s a little creepily fascistic and not as non-Nazi as I suggested above. I put it this way in a recent tweet … 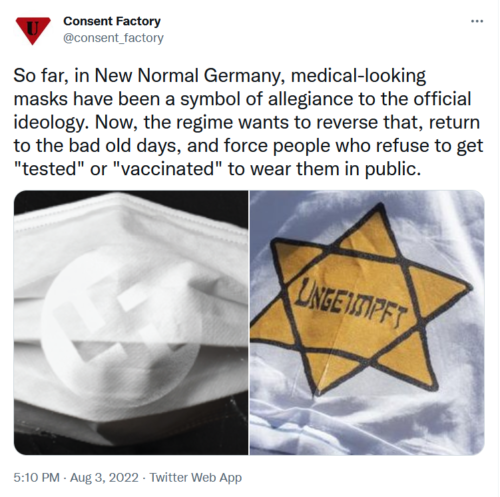 Needless to say, this could get confusing, as the New Normals are extremely attached to their masks, which they’ve been wearing — like Nazis wore swastika lapel pins — to publicly signal their “solidarity” (i.e., mindless conformity to the new official ideology) for going on the last two and half years. And now the masks will function like the “Jewish Badges” with the Star of David that the Nazis forced the Jews to wear, except on public transportation, and planes and trains, unless the federal states decide to force everyone to wear masks everywhere, in which case … well, you get the general idea.

Still, the fact that everyone will have to present their “vaccination papers” (or their “recovery papers”) to enter a restaurant, or a bar, or go to the cinema or the theater, and, basically, to do anything else in society, should make up for the mask confusion. I mean, what kind of a fascist society would it be if you didn’t have to show your “papers” to some beady-eyed goon to get a cup of coffee?

Now, before you report me to the BfV; i.e., Germany’s federal domestic intelligence agency, for “relativizing the Holocaust” and “delegitimizing the democratic state,” both of which are crimes here in Germany, I want to say, again, for the record, that I do not advocate using the yellow Star of David to protest the New Normal (as in the photo in the tweet above). I think it is foolish, and counterproductive. The New Normal has nothing to do with the Holocaust, or the Jews, or even Nazism, per se.

But let’s be clear about what’s happening in Germany.

I’m sorry, but the parallels are undeniable. 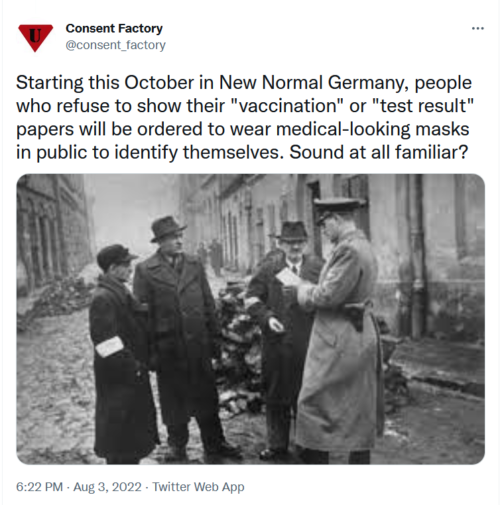 This new official ideology has nothing to do with a respiratory virus or any other public health threat.  At this point, I do not have to repeat this argument.  The majority of countries around the world have finally rescinded their “emergency measures” and acknowledged the facts that we “conspiracy theorists” have been citing for the past two and a half years, and that we have been relentlessly demonized and censored for citing.

Not even Germany’s recent independent evaluation of its “Corona Measures” could produce any evidence supporting their effectiveness. Seriously, the New Normal German authorities are basing their claim for the efficacy of mask mandates on “the Golden Syrian Hamster Model.” (You probably think I’m joking, but I’m not.) And Karl Lauterbach, the fanatical Minister of Health, has openly stated that forcing “the Unvaccinated” to wear masks in public is a “motivation” tactic to harass them into following orders and submitting to a “vaccination” that even the German government now admits has killed or seriously injured tens of thousands of people, at minimum, in Germany.

No, this new official ideology, the New Normal — which is still very much in effect in places like Germany, China, Canada, Australia, New York, California, etc. — is nakedly, undeniably, purely ideological. It is based, not on facts, but belief. It is a belief system, as is every other ideology. It is essentially no different than an official religion … one which demonizes and persecutes all other religions, and non-religions, and all other belief systems.

Is any of this sounding vaguely familiar?

I’m fairly certain that someone will read this (and see the tweets I included above) and report me for “relativizing the Holocaust.” For the record, I am not “relativizing the Holocaust.” I’m comparing one totalitarian system to another. Yes, Nazi Germany and New Normal Germany are two very different totalitarian systems, and I have outlined their essential differences and similarities, but, come on, this is not that fucking hard. In Nazi Germany, the Jews were the scapegoats. In New Normal Germany, it’s “the Unvaccinated.”

How much more blatant does it have to get before people stop pretending that this isn’t what it is? Do the authorities have to literally put us in camps? How many more people have to die or be seriously injured by “vaccinations” they did not need but were forced to submit to? I’m not talking to the New Normals now, nor to the people who have been fighting this all along. I’m talking to the people who see what is happening, and are horrified by what is happening, but, for whatever reasons, have refused to speak out … and, yes, I know there are very good reasons. Some of you have families to support, and careers to protect, and, seriously, I get it. But how far does it have to go? At what point do you feel you have to speak out regardless of the personal and professional consequences?

Maybe take some time and meditate on that.

Oh, and here’s a little visual aid that might help folks with their meditations. It’s some graffiti that someone painted on the wall of a courtyard here in New Normal Germany, in the Autumn of 2021, I think. I posted it back then, but it didn’t make much of an impression. Perhaps it will make one now. 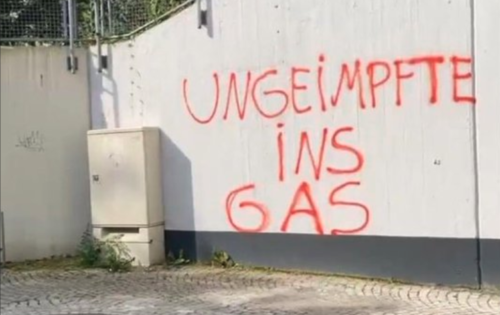 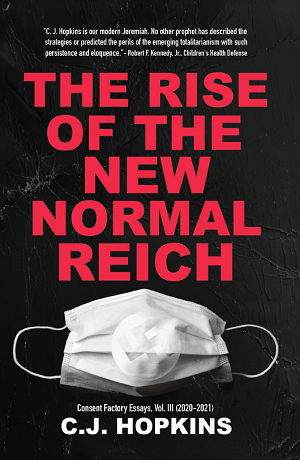