Well, gosh, this is kind of embarrassing. For approximately the last two and a half years, I have been documenting, analyzing, and occasionally satirizing the so-called “New Normal,” i.e., the new, pathologized, official ideology that has been rolled out all across the planet by the global-capitalist ruling classes under the pretext of combating an apocalyptic pandemic … or at least that’s what I thought was going on.

As it turns out, I was totally wrong.

Apparently, the global-capitalist ruling establishment (or “GloboCap,” as I often refer to the unaccountable, supranational network of global corporations, banks, governments, and non-governmental governing entities that unaccountably govern our world) has not been rolling out a new official ideology, or pathologized form of totalitarianism, or not intentionally in any event.

No one has been methodically gaslighting anyone, or terrorizing anyone with propaganda, or censoring or segregating anyone, or coercing anyone to get needlessly “vaccinated” with any sort of dangerous experimental drugs, or consciously conspiring with anyone to do anything.

Everyone has simply been suffering from Mass Formation Hypnosis Disorder!

I know, you probably find this hard to believe, especially because I have been making precisely the opposite case for over two years now, but I saw it on the Alex Jones show! Mattias Desmet, a professor from Belgium, and “the world’s leading expert” on this new disorder, explained it all in meticulous detail. 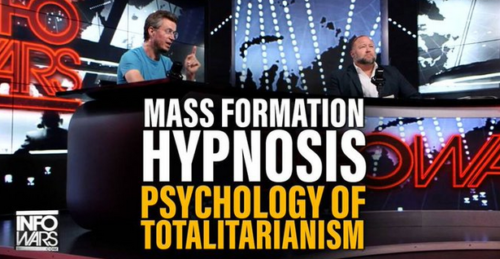 According to Desmet, the way this disorder works is, people feel “lonely and isolated,” which makes them feel angry, but they don’t have anything or anyone to unleash their anger on, so they form a mass and hypnotize each other, and invent a new fanatical ideology that they all fanatically hypnotically believe in, which, at that point, their rulers, who are also hypnotized, have no choice but to go full-totalitarian, and hypnotize everyone even more, because that is what the hypnotized mass demands, so that they can finally unleash their anger on someone; i.e., those who have managed to avoid being hypnotized (one assumes with some special anti-hypnosis technology, but I don’t think Professor Desmet explained that part).

And, OK, before you hypnosis deniers start sending me emails denying the power of hypnosis to totally totalitarianize society, listen to Professor Desmet explain how surgeons in Belgium are routinely performing open-heart surgery on hypnotized patients without any anesthetic whatsoever! They just saw right through their breastbones with a sternum saw, ratchet open their rib cages with a sternal retractor, and start slicing into the patients’ hearts … and these patients don’t even flinch or anything! He has witnessed this with his own two eyes! Or, all right, it seems he hasn’t actually witnessed this with his own two eyes. It seems he was actually just lying when he said that, which he confessed to in a lengthy Facebook post (after people pointed out that he had lied) in which he publicly wondered why he had lied, and then rationalized his lie with various excuses, and posted several misleading links in an attempt to suggest that he hadn’t actually lied, despite the fact that he had just admitted he did, and just generally tried to muddy the waters with a lot of awkward psychobabble.

But I don’t mean to cast aspersions. Professor Desmet is, after all, “the world’s leading expert” on “Mass Formation Psychosis” or simply “Mass Formation” or whatever you want to call this fairy tale that he and others have been peddling, not just on clown shows like Alex Jones’, but to massive audiences like Tucker Carlson’s … Seriously now, I have been aware of Desmet’s theory for some time, but I had mostly held my tongue about it because (a) I considered it relatively harmless, and (b) I’m generally reluctant to tear another vocal opponent of the New Normal a new asshole. We get enough of that from the New Normal “fact checkers.” However, unfortunately, this “mass hypnosis” gibberish has gained enough traction that it has now become dangerous, so I need to do a little new-asshole-tearing. (Fanatical fans of Professor Desmet will probably want to navigate away at this point.)

What we’ve been experiencing for the past two and a half years — and arguably the last six and a half years — is not the result of “mass hypnosis.” The global-capitalist ruling establishment is destabilizing and restructuring societies, globally. The people that staged and published this photograph in January 2020 and lied to the masses about the Covid death rate (i.e., 3.4%) a few months later were not mass-hypnotized. They knew what they were doing. 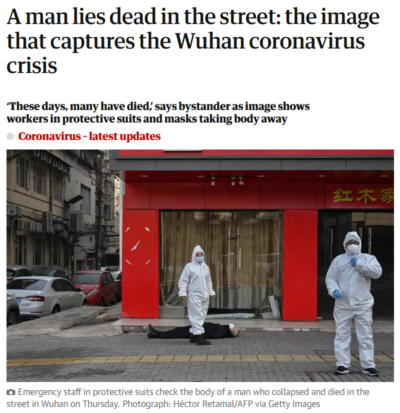 Likewise, the people who went New Normal (i.e., the vast majority of most societies) were not “mass hypnotized” or in some kind of trance. They were simply looking out for themselves by conforming to the new official “reality.” This is standard behavior in totalitarian systems, and cults, and even non-totalitarian systems. I explained it this way in a recent interview …

Totalitarianism can be imposed on any society if the government, or whatever structure rules it, controls the essential elements of power (i.e., the military, the police, the media, the culture industry, etc.). Once the transition to totalitarianism begins, you can count on roughly two thirds of the society either embracing it or acquiescing to it, not because they are in some vulnerable psychological state, but rather because they correctly perceive which way the wind is blowing and they don’t want to challenge the totalitarian regime and be punished for doing so. They are not hypnotized or under any other kind of spell. It’s pure survival instinct. … Not to put too fine a point on it, but most people are either perfectly content to conform to whatever type of society those in power impose on them as long as their basic needs are met, or they are not content [to do so], but they are cowards, so they stand by in silence. I don’t mean that as a judgment or an insult. Cowardice and the ability to abandon one’s principles (or not having any principles in the first place) are very positive traits to have if your goal is survival. When a society goes totalitarian or is otherwise occupied and radically transformed, it’s the rebels and dissidents who get lined up against the wall and shot, not the cowards and collaborators.

I realize how harsh that sounds. It’s meant to, and at the same time, it isn’t. We are, all of us, capable of such cowardice and betrayal of our fundamental principles, given the right set of circumstances. Everyone has a breaking point. If you haven’t experienced yours yet … well, I hope you never do.

The point is, we are dealing with questions of power, not a psychological condition. Desmet’s theory pathologizes the political essence of totalitarianism, just like the official New Normal narrative pathologizes and displaces its political character, rendering it immune to political opposition, and rendering its opponents “conspiracy theorists,” or “paranoid,” or otherwise divorced from “reality,” thus stripping us of political legitimacy.

In this “Mass Formation” fairy tale, the political conflict disappears. The totalitarian system and those who resist it are replaced by a psychiatrist and a psychiatric patient. In this story, there is no one and nothing to fight. We just need to find a “cure” or a “treatment” for this bizarre new psychiatric disorder that keeps causing the masses to hypnotize each other and invent some new fanatical totalitarian ideology in order to alleviate the pent-up frustration caused by their loneliness and isolation by unleashing their rage on unhypnotized persons!

Or whatever … maybe I don’t understand the nuances of “Mass Formation” theory. I’m not a professional psychologist or anything. I’m sure one or two of Professor Desmet’s fans will be happy to explain it all to me, if they’re not too busy undergoing open-heart surgery without anesthetic. I wouldn’t want to interfere with that!